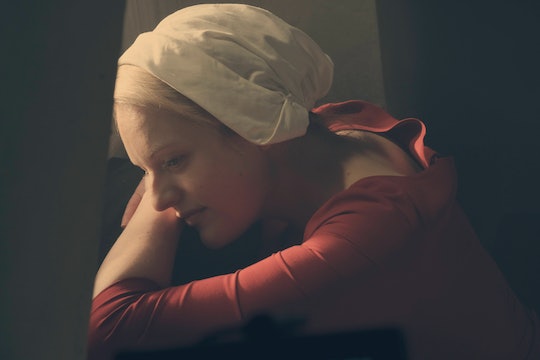 Offred's Fate Was Left Open-Ended On 'The Handmaid's Tale'

The first season of The Handmaid's Tale was a harrowing journey through the Republic of Gilead, a place with rigid gender boundaries where the tiniest step out of line could have the gravest of consequences. The character leading viewers through everything was June, who was renamed Offred to signify the fact that she "belonged" to her commander Fred Waterford. She grew more rebellious as the season went on and in the Season 1 finale (spoilers!) she finally outright refused to follow orders. That may have led to her being taken away in a black van by guards, which was what usually happened to those who didn't obey. But where is Offred going on The Handmaid's Tale?

Nobody knows for sure — not even June herself, though she's hopeful it will work out in her favor. After refusing to stone Janine to death at a Salvaging (Janine was ordered to death for putting her baby in danger in "The Bridge"), June knew punishment was coming but she didn't know what form it would take. It was possible that she was being taken away to be put on trial much like Emily was in Episode 3. But that doesn't quite add up for a few reasons, chief among them that neither Waterford nor his wife Serena Joy had any idea what was going on. Surely they would be told if their handmaid was going to be put on trial, especially because she was pregnant and by law that child would be theirs.

The other major hint that something else was going on came from Nick. Right before June was taken away by the guards, he told her to just go with them, so maybe he knew something she didn't. There is a chance that Nick, knowing June was pregnant with his child, arranged for her to be taken out of the house to safety. He must have connections through his position as an Eye, and could have even contacted Mayday, the resistance. June being taken away, seemingly by the government, could just be a ploy to get her out of Gilead without raising suspicions.

That interpretation would support Margaret Atwood's novel, even with its similarly open-ended final scene. In both the Hulu series and the book, the audience is given no hints about whether June is being taken to safety or punishment. But the book heavily implies that June was able to get out of Gilead and share her story. It also theorized that Nick was a member of Mayday and therefore able to help June escape.

The novel's purposefully unsatisfying ending has been debated since its release, because there were no solid answers about Offred's fate. The Hulu series will take that story to new, unknown places in Season 2; fans may not know where June is being taken yet, but there is comfort in knowing that you will find out for sure. It'll just take a little while.