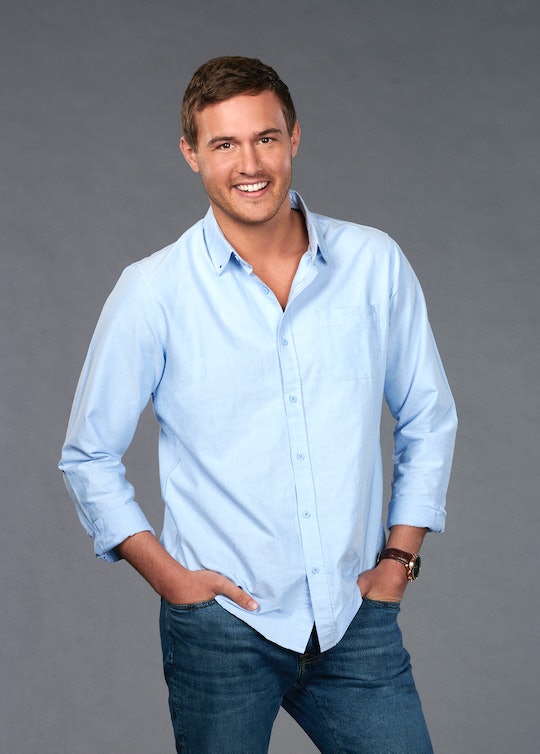 Peter Is Taking Hannah To Home Base On 'The Bachelorette'

If any man on Hannah's season of The Bachelorette can steal Tyler C.'s "Most Adorable Human" title it would be Pilot Peter, the only guy yet to officially ask Hannah to be his girlfriend. Now going into hometowns, the pressure is on in a big way. So I'm wondering where Peter is from. The Bachelorette contestant can fly anywhere, but where does he call home?

Unlike the many Southern charmers vying for Hannah's heart this season, Peter is from Westlake Village, California, according to his ABC bio. In this bio he also claims to enjoy "snowboarding, watching football, and line dancing," and his life motto is 'you should live this life always expecting something great is about to happen to you.'" Is that laid-back and positive vibe a Cali thing or just God-given cuteness?

So it looks like Peter's hometown is in Los Angeles County and only has about 8,500 people. It's also rated one of the safest places to live, which is why a lot of retirees go when they're done with work life. I don't know about the retirees, but I may venture over there if Hannah doesn't.

As for the rest of Peter's background, he's mentioned a few times the whole pilot thing runs in the family — his dad and brother are pilots, and his mother was a flight attendant. Peter's promised Hannah to fly her anywhere she wants to go, and if I were her I'd want to hop on a plane and fly far away from the Bachelor dudes if any more drama kicks up.

In case you missed it, the big drama this season is that everyone has a problem with Luke P. Everyone except Hannah that is. Though in the grand scheme of blow-outs with the other men Peter has been relatively quiet, he has still had a couple of opportunities to tell Luke to back off a bit. Lots of fans online have accused Luke of borderline abusive behavior, including physically threatening the other contestants, lying, and straight up gaslighting Hannah. But Hannah insists there's a side of Luke that people just aren't seeing, and apparently their connection is good enough that she's willing to compromise on the bad behavior.

But Hannah also has some off-the-charts chemistry with Peter. Was there anybody on either side of the screen not sweating after that sauna make out session?

So I guess the only thing to see now if that "fire" is enough to base a happily-ever-after on. Can Peter convince Hannah to give up her Alabama roots and move out west? Or might Hannah get Peter to move his home base closer to her? But before any of those discussions can happen Hannah and Peter have to see if their families approve. And first stop is California.

Who knows if Peter's pilot family will think Hannah is the woman for him. I'm assuming having some sort of plane-related profession isn't a deal-breaker for them. But I've seen stranger families before on this show.