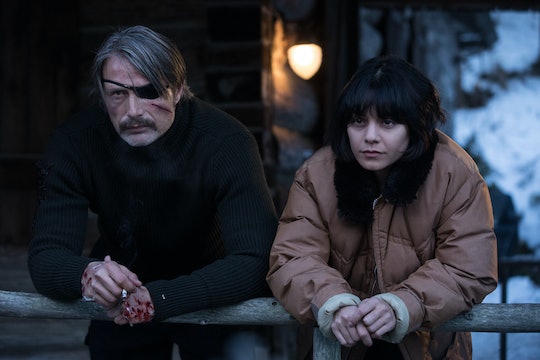 A new Netflix original film, Polar, is being billed as John Wick meets Sin City. The flick is based on a series of graphic novels by Spanish writer and illustrator Victor Santos. Famously, the original webcomic, prior to its Dark Horse adaptation, featured no dialogue, so there was some interpreting to be done. One particular adjustment is the location where everything begins, when retired hitman Duncan Vizla (Mads Mikkelsen) meets Vanessa Hudgens’ Camille. So where is Polar set?

The antihero of the story retires to a cabin in Montana, where it’s cold and quiet, apparently. But not too quiet: Because as it turns out, his former employer doesn’t want to pay out his retirement pension (a cool $8 mill), and decides to have him killed, instead. Seeing as Blut (Matt Lucas, of Bridesmaids and Doctor Who fame) employs assassins, it makes sense that he’d choose this route. However, given the talents of this particular retiree, it’s going to take the best he’s got to take down the Black Kaiser.

This is a movie full of action set in a very unique world: The fashion is reminiscent of the ‘70s, and everything is hyper-stylized, in keeping with the tone of the graphic novels. But don’t take my word for it — check out the trailer:

Star Mikkelsen (who, coincidentally, also stars in the similarly-titled Arctic, out on Feb. 1) has a true appreciation for this particular genre — referring to both action films and movies based on comics and graphic novels. “I love assassin films, I love hitman films," he told IGN. "There’s something already film noir about that whole story. There’s something … essential. Like, life and death. Stories about real men and real women.” Referencing his role in Doctor Strange, he added “I didn’t only grow up with Marvel, I grew up with graphic novels… I’m a huge fan of this universe.” The focus on the exciting visuals as opposed to the dialogue was a draw for him.

Unfortunately, the critical reviews for Polar aren’t spectacular so far. Both Vulture and Nerdist feel that it misses the mark, tonally speaking. While critics have, well, criticized the over-saturation and lack of depth in narrative, Santos himself seems pleased with the reimagining of his work. He calls director Jonas Åkerlund’s work “a faithful adaptation” that “respected the spirit of the book.” So while it’s certainly not exactly what you’d see in graphic novel form, the creator himself sees the story come alive in the film, and especially the character of the Black Kaiser, as played by Mikkelsen. Obviously, there are going to be discrepancies, but a vote of confidence from Santos is a positive thing here.

It’s kind of perfect that this movie is coming out right now, if you think about it. It’s been really cold for those in the northeast parts of the U.S., and though it’s letting up a bit, it looks like next week is going to bring more freezing temperatures. So what better to do than bundle up and watch a colorful action flick? You can let the characters on screen deal with the snow, and only make the trek to the door to get your delivery order.