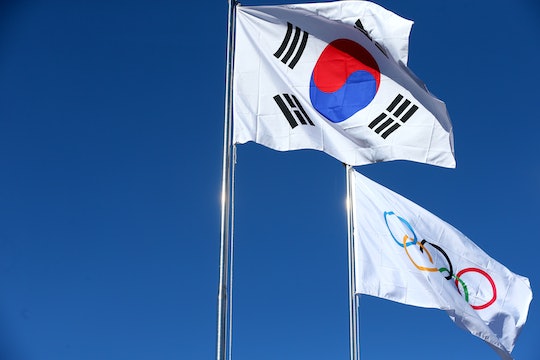 Everything You Need To Know About Is PyeongChang, Home Of The 2018 Winter Olympics

On Feb. 9, the Olympic Games will bring nearly 100 countries together for friendly athletic competition to promote international cooperation and camaraderie. The global audience gets a taste of each country's culture during the Parade of Nations, but the host country and specific city where the games are held have a special opportunity to introduce themselves to the world. Those on the other side of the world might be wondering, where is PyeongChang, the place where we're sending our best athletes this year?

Located in the Taebaek Mountains region of South Korea (also known as the Republic of Korea), PyeongChang is about 100 miles east of the nation's capital in Seoul — a 90 minute trip, thanks to a new Olympics-inspired bullet train. The area is known for its Buddhist temples and ski resorts, and it's home to about 43,000 people, according to U.S. News & World Report.

If you're curious about the spelling, it was a very deliberate choice; it was originally called Pyongchang, but travelers often confused the popular tourist spot with North Korean capital Pyongyang. In 2007, South Korea's Olympic bid committee came up with the idea to add an "e" and capitalize the "C" to differentiate between the two. The region lost out on the 2010 and 2014 games, but the third time was the charm.

PyeongChang is just 50 miles south of the Demilitarized Zone separating South Korea from North Korea. For those worried about all those missiles the neighbors have been messing around with lately, it might be comforting to learn that North Korea has sent its own delegation of athletes, as well as performers, to participate in the games. According to The New York Times, South Korea has tens of thousands of security personnel, including 50,000 soldiers, standing by to keep the event safe.

The Korean Tourism Organization credits PyeongChang's "lush forests and clean rivers," as well as its reputation for heavy snowfall, in its role as a winter sports travel destination. Those attending the Olympics will have plenty to do during down time at PyeongChang's two different ice climbing walls and several indoor and outdoor skating rinks. Visitors can also hike on the Odaesan Mountain Seonjaegil Road, or the trail connecting the Woljeongsa Temple and Sangwonsa Temple. Kids will enjoy sledding at Pocheon Sanjeonghosu Lake, which features an ice slide.

Visitors who would rather watch sports than actually participate in them can check out the PyeongChang Trout Festival at the Odaecheon Stream, located right in the heart of the cluster of Olympic venues. Guests can participate in traditional folk games, take a ride on an ATV or a sleigh train, or try their hand at ice fishing. Anything caught can be brought to a local restaurant, where they'll cook it or prepare it raw upon request. The festival runs through Feb. 25.

If you're not attending the Olympics, but PyeongChang has piqued your interest, there's still plenty going on there the rest of the year. Condé Nast Traveler hails the region as "the Tahoe to Seoul's Los Angeles," thanks to its 12 ski areas, four of which are in PyeongChang proper. In the summer, visitors can enjoy kayaking on Paroho Lake, hiking the pine forests of Chiaksan National Park, and surfing at the sandy beaches of PyeongChang's east coast, which is popular with Australians and "Japanese hipsters" (BRB, Googling images of "Japanese hipsters surfing"). The more daring vacationer might want to check out 38 Parallel Beach, which is so close to the DMZ, barbed wire actually extends into the water. And for the less daring (no shame), there's the seaside resort town of Samcheok. PyeongChang sounds like it really has something for everyone.