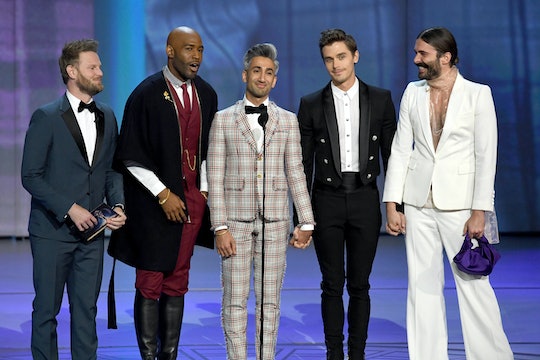 I'm sure you've heard the news — that Queer Eye's Fab Five are back for your viewing delight. After a successful reboot of the early '00s original Queer Eye for the Straight Guy, the new version featured a more diverse cast with adventures all over. Seasons 1 and 2 focused on Atlanta, Georgia and neighboring towns to give residents the makeover of their dreams. With so many amazing episodes in their back pocket, fans are dying to know where Queer Eye Season 3 is set.

It looks like the guys are took on Kansas City, Missouri in Season 3, along with a four-episode special in Tokyo, Japan. Yes, this is the dream and yes — you're so very welcome, Queer Eye fans. If you've been following along, most didn't know the show had even been picked up for another season until very recently. Up until last April, any details were either unknown or secret. It was then Kansas City Star posted an open casting call for the show. Before that, there was only one person who knew of the Fab Five's visit — Kansas City film commissioner, Stephane Scupham, according to The Hollywood Reporter.

"They weren’t even saying who they were,” Scupham said. "It was just someone inquiring about our local incentive, which happens all the time." I can't even imagine their surprise when they realized it was really the one and only Fab Five heading to town.

The five even had an Emmy nominations reveal party at local luxury apartment complex called Two Light. Once the news came out, Scupham added, "It has been an outpouring of love and support from citizens of Kansas City, from people to businesses and organizations in Kansas City."

As for your geography lesson for the day, Kansas City sits along Missouri's western edge and is mostly known for its jazz heritage, barbecue, and Nelson-Adkins Museum of Art which contains nearly 40,000 pieces of art, which is worth a visit alone. Downtown is home of the 2019 Big 12 Men’s Basketball Championship, in case you're into that, and Kansas City is actually the largest city in the U.S with the population estimated in 2017 at a whopping 488,943. It'll be interesting to see how the Fab Five choose from such a wide pool of possible makeover entries, but because all eight episodes are available to stream at once, you can find out ASAP.

Your favorite team — Bobby Berk, Antoni Porowski, Jonathan van Ness, Tan France and Karamo Brown — may have worked the Atlanta areas in previous seasons, but Kansas City is just as charming. Plus, the Queer Eye guys provide insight for all of us at home in need of some tips on food, grooming, or fashion tips so it's like a free consultation from the comfort of your couch (or bed. No judgement).

The three-time Emmy-award-winning show isn't only about makeovers. If you'll remember, every contestant chosen has an emotional story viewers can connect to. Basically, while learning how to tie the perfect tie, you'll probably also go through a box or two of Kleenex. Yep — that's the Queer Eye way and I couldn't be more excited.