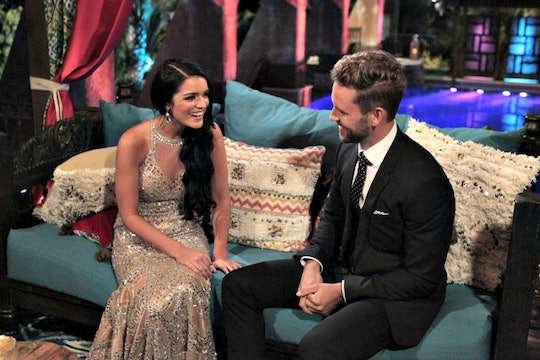 This week, Raven got to go on a one-on-one date with Nick in his hometown and meet his family at his little sister's soccer game. The two are looking mighty close, so it's probably worth getting to know the contestant a little better. Raven's store, Grey Suede, is located in Jonesboro, Arkansas, but if you live too far away to go pay your respects, you can also just order online from their website. Gates is 25 years old and from Hoxie, Arkansas and just opened the store last spring, but judging from the shop's social media accounts, business seems to be booming.

The store sells women's clothing — everything from jeans and graphic T-shirts to sweaters and fancy dresses. She even has a lingerie section with super cute bralettes and accessories like chokers, earrings, and hats. It's sort of a huge operation. Since being on the show, Grey Suede has also been promoting The Bachelor swag, like wine glasses and a sweatshirt that says, "Will You Accept This Rosé,' that any hardcore fan would want (I accept gifts, people). You really get a feel for Raven's personality through the stuff she sells — it's all practical, very cute, and down to earth. Nothing showy here, folks.

On her store's website, her team is also trying to play up Raven's part on the show. They have a "What Kind Of Bachelorette Contestant Are You" quiz and a round up cocktails that match The Bachelor legends. Like Chad, who is just straight vodka and Nick, who is a whiskey sour because, "very very reliable sources tell me he's a whiskey drinker, and two, everyone has mixed feelings about Nick." Which is very valid. Raven doesn't write the posts, someone on her crew does, so she must be the reliable source as to what Nick likes to sip on during all those cocktail party nights.

But her friends must feel very, vey confident about Raven's performance on the show because they included her as a cocktail, too. The southern belle is a Bloody Mary, her friend writes, because she is "fun, adventurous, fierce, and will always be there when you need her, much like the Bloody Mary." She adds, "not to mention she's a bit spicy and sassy as well!"

Obviously, everyone loves Raven from her hometown and support her, which is nice to see. Hopefully Nick thinks she's as awesome as they do — or at least buys something from Grey Suede for his little sister.