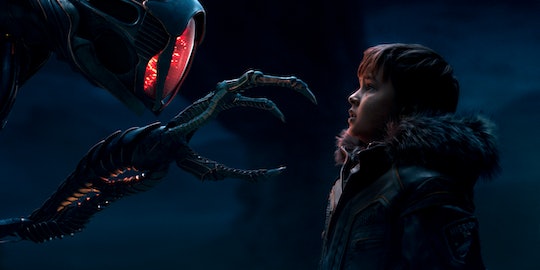 The Robot From 'Lost In Space' Has An Intriguing Backstory

Warning: spoilers for Episode 2 ahead! When Will Robinson brings Robot back to his family's crash site to help them out in the first episode of Lost in Space, the alien acts as a deus ex machina. He appears seemingly out of nowhere with exactly the right skills to save everyone just when survival seems absolutely impossible. So where is Robot from on Lost in Space? That's the question all of the Robinsons were surely asking themselves after their unexpected rescue.

Though they tried to investigate Robot's origins in Episode 2, there were no clear answers to be found. Matriarch Maureen determined that Robot was built, not born, based on the material he was made out of. But that's about the only definitive fact viewers know about him in the earliest episodes. When Maureen, John, and Will trekked back to Robot's own destroyed ship with him, they discovered a lot of clues — but nothing that revealed where he originally came from.

While Will and Robot had a friendly game of catch, Maureen and John entered the ship. They found some pretty strange machinery and architecture, all seemingly made out of the same metal as Robot himself. They also ended up in the center of some kind of strange, glowing orb full of light and color that looked exactly like the pattern on Robot's face. Maureen quickly deduced that it was an interactive map, which pinpointed their location in an unknown galaxy.

Flashbacks revealed a violent Robot killing people with abandon at The Resolute station the Robinsons originally departed from. That reflected the more contentious behavior he exhibited when Will first found him, before they formed their mostly unspoken connection. Perhaps most strangely of all, Robot somehow telepathically shared those flashbacks with Will while they were both touching part of the ship.

It seems as though Robot is alien-made, and has a physical bond with the ship he was traveling in. But that fairly obvious conclusion doesn't help the audience when it comes to figuring out where Robot hails from. That's likely a question the rest of the season will explore, because there's no doubt that more is going on here than the audience knows. Why was Robot attacking humans? Why does he trust Will so much? Are there more like him, and what is the society like that created him? Maybe on that home planet, Robots are as ubiquitous as iPhones.

Netflix's Lost in Space is based on a TV show of the same name from the mid-1960s, but unfortunately the source material doesn't shed any light on Robot either. Back then he was a humorous sidekick who had taken a particular shine to young Will, warning him with the catchphrase he also spouts in Episode 1: "Danger, Will Robinson!" With recognizable human emotions and a design that was far from terrifying, the original Robot was more comedic relief than anything else.

Netflix has taken the character in a different direction, and that includes having Will stumble across him on the strange new planet. In the show from the '60s, Robot was always there. Showrunner Zack Estrin discussed the changes with Entertainment Weekly, saying:

The Robot was one of the hardest pieces of casting to do in the show because it's such an iconic thing and something you can really get wrong. And it's a different experience watching the show versus the trailer. You fall in love with this character. It's less about how it looks than who it is.

He added later, "Whereas the original Robot was exactly what you thought it was, our Robot is a bit of a mystery that unfolds over the course of the season." It can be frustrating to go without answers, but getting to the bottom of the mystery is half the fun. And it doesn't look like Robot will be a mystery forever: fans will just have to wait a little to see where he came from.