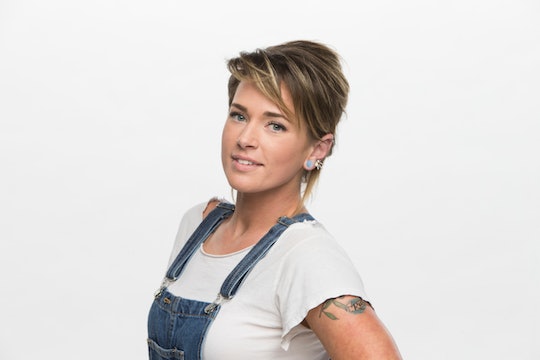 'Big Brother' Turned Sam Into A Robot & It Was Amazing

In what will surely go down as one of the most memorable Big Brother punishments of the series, houseguest Sam Bledsoe was turned into a robot after losing the first competition of the season. OK, so she wasn't really transformed into an actual robot, but she controls and speaks through it from some remote location, so where is Sam while she’s a robot on Big Brother? Her punishment was epic, to say the least, and she kind of makes an amazing robot. But when RoboSam is in the house, the real live human Sam is not, leading fans to wonder where she physically goes while she’s playing the part of the robot.

My best guess would be that the producers put Sam in sequester of some kind while she's interacting with her roommates as a robot. Before the houseguests enter the house, or even the studio, they’re all sequestered in different hotel rooms and confined to those spaces until it’s time for the show to begin. Sam could be off the studio in a hotel room. But I think it's more likely she is in a makeshift room somewhere outside of the house — but still on the studio lot.

During Season 17 of Big Brother, twins Liz and Julia Nolan were part of another epic twist to the game when they entered the Big Brother house as one person. Or, rather, they took turns being the same houseguest and would switch out places when one went to the Diary Room. In this case, you have to assume that the other twin was nearby but sequestered, and it’s likely the same case for Sam this season. It's still not clear yet if Sam will have to sleep as her robot self or if production will allow her to come back into the house for that, but she’s really at their mercy for the time being.

When Julie Chen explained the rules of Sam’s punishment, she said that at any given time, Sam will hear the words "robot online" or "robot offline" to let her know if she can come back into the house in human form or not. "Sam, you are officially a robot. Your punishment will also be in effect until the first live eviction," Chen announced on the show Wednesday night. "Whenever you hear the words 'robot offline,' you must go to the Diary Room, and you will return to the game as a human. But when you hear the words 'robot online,' you will return to the house as a robot."

Sam is probably close by so that she can switch places with her robot counterpart as needed, but it’s more than likely in a secluded room without any contact to the outside world and of course with no special treatments. But ever since her now recognizable voice came speaking through the robot in the Big Brother house, plenty of fans have wondered where she actually is.

One fan on Twitter even pointed out that Sam has the perfect voice for a robot and honestly, she seriously does. If Big Brother doesn't work out for Sam, then I highly recommend some voice acting work because I could honestly listen to her speak all day.

Thankfully, the robot punishment only lasts until eviction night, so Sam doesn't have much longer to switch between her two different forms and continue running back and forth between the house and what is probably a secure and secluded room behind the scenes. But I know I can't be the only one when I say that RoboSam was the Big Brother punishment we never knew we needed.