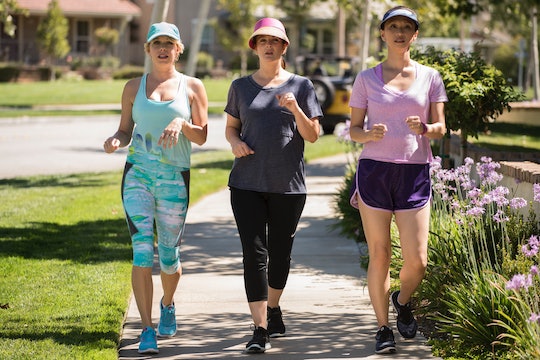 'Santa Clarita Diet' Is Set In A Great Location

Drew Barrymore is coming to a streaming account near you. The Golden Globe winner is starring in Netflix's upcoming comedy Santa Clarita Diet, leaving many to wonder where is Santa Clarita located? Santa Clarita is actually a part of Los Angeles County in California and is the third largest city in the county. The SoCal is known for being gorgeous, with just enough country to take bike rides and hike along trails. There's also a lot of different attractions for families like Six Flags and Universal Studios Hollywood. Basically, Santa Clarita seems like a pretty cool city and place to live, but in Barrymore's new comedy the city gets a bit more interesting.

Santa Clarita Diet follows Sheila (Barrymore) and her husband Joel (Timothy Olyphant) who are real estate agents in Santa Clarita. Their lives are pretty normal, that is until Sheila dies. Then things start to get a bit weird. At first the couple doesn't even realize Sheila's dead until she starts acting a bit strange. She only sleeps two hours a night yet has a lot of energy throughout the day. She also doesn't have a heart beat, and most importantly, she likes to eat human flesh.

Soon it becomes clear she's a member of the undead (the term zombie is apparently a bit offensive on this show), and she now needs a new food source humans. Wanting to be a supportive husband, Joel decides to help her get food by killing people, but only the ones that deserve of, it course. (You know, because otherwise the whole thing would be totally inappropriate.) Based on the trailer, it looks like their daughter Abby (Liv Hewson) also helps out with her mom's new diet, making this a full-on family affair. How... sweet? I guess?

Despite being undead, Sheila and Joel continue their real estate business, and simply try to adjust to doing things a little differently from here on out. The show gives me serious iZombie vibes, but with a family sitcom twist. The premise of the show is interesting enough to draw people in and with Barrymore leading the cast, while also producing, it definitely has a good shot at success. The cast also includes Castle alum Nathan Fillion, along with Natalie Morales and Senyo Amoaku.

You can see Santa Clarita Diet when it begins streaming on Netflix on Friday, Feb. 3. Just maybe don't eat anything right beforehand.