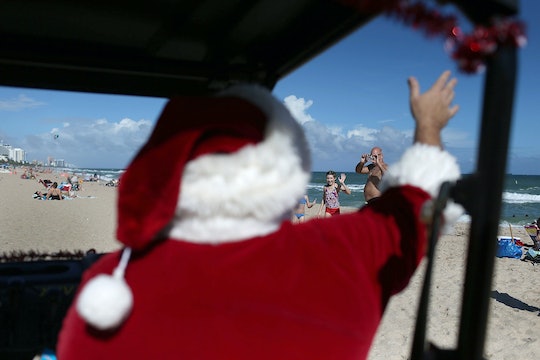 Where Is Santa Claus Right Now? NORAD And Google Are On The Case

Santa Claus is out and about, somehow defying math and physics to deliver presents to the millions children around the globe, with eight flying reindeer in tow. And yes, the Big Nick is already flying his way across timezones, as New Zealand was the first country to celebrate Christmas this morning while for many of us, it's still just Christmas Eve. So just where is Santa Claus right now? While the answer seems like it would be arbitrary, NORAD and Google would disagree, as they each are tracking Santa Claus via their "totally based in science" online Santa Trackers.

If there's one thing you wouldn't expect to say, "There's an app for that," it's for tracking jolly old Saint Nick, but remember — this is a post-Snowden world we live in now. In all fairness, both the NORAD Tracks Santa and Google Santa Tracker predate our modern age of drone surveillance. In fact, the NORAD Santa Tracker dates back to 1955, thanks to a phone number typo in a Colorado Springs newspaper that dialed NORAD. Children nervously dialed the number hoping to reach Santa and instead got Col. Harry Shoup, who thankfully played along as child after child called him that Christmas.

The NORAD tracker has since evolved to more modern tastes with an online portal and tweets out his location from the official NORAD Santa Twitter account:

Meanwhile, Google, master of all things search, has been tracking Santa since TKyear with their Google Santa Tracker. Google's interactive site combines their Google Maps interface — backed by a very jazzy Christmas-inspired soundtrack — with a running feed of Santa-related activity and fascinating world geography facts. Using your location data, Google Santa Tracker calculates just how far away Santa is from your location as well as how many gifts he's delivered. It is a hoot to watch:

So whether you've got geeky little ones chomping at the bit to know just when Santa's going to show up at your house, or if you're looking to kill some time at your family-obligated holiday gatherings, the NORAD and Google Santa Trackers are your best best this Christmas Eve.