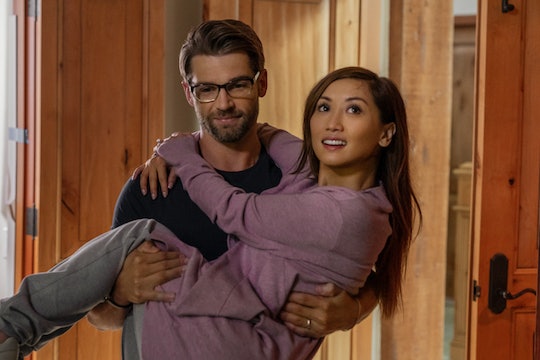 Yeah — I Don't Want To Visit The 'Secret Obsession' House

Who doesn't love a soapy thriller starring former Disney stars and bearded hunks set in remote locales? No one, that's who. So, if you're like me you're now asking: Where is Secret Obsession set? — Because beautiful as this secluded cabin might be, you probably want to steer clear, am I right?

Sadly for everyone involved in this quest, I couldn't find any specific answers. Netflix's synopsis of the film only says it's set at a "secluded mountain estate." So this could be literally anywhere near mountains (Hawaii? Switzerland? Nepal?), but I'm going to guess it's somewhere in the continental United States just going by the accents. Colorado?

But I'm getting ahead of myself, because I haven't even told you what the film is about.

Former Disney Channel star Brenda Song stars in Secret Obsession as Jennifer, a newlywed who gets into a car accident and apparently suffers a bad case of amnesia, as she seems to forget her entire life. Her new husband takes her to the aforementioned estate to recover, only the trailer wastes no time in telling viewers that the man who says he's Russell actually isn't who he's claiming to be. Most importantly he definitely isn't the man Jennifer married. He's a man who has been stalking her.

So, he definitely didn't take her home. But where did he take her? I guess that's a piece of the mystery viewers will need to figure out on their own. Trust me, I tried to figure it out by pausing the trailer every time I thought I could read something that might be a clue.

The only hint I found came from an email interview Song gave Refinery29. "All the exteriors of the rest stop and the hospital scenes were shot on an abandoned campus. At night, just walking around set was really eerie and scary," she said. "I was scared to go to craft service." Any place that evokes fear in me when I'm hungry is not a place I want to be.

All jokes aside, filming Secret Obsession required Song access emotions she's not used to feeling, especially as a veteran of comedies like The Suite Life of Zack & Cody. She told Decider the experience was “really scary and really hard. I’m usually a very lighthearted person and I’ve learned to make light of tragedies and things in my life. To be able to step back and step into these dark places… At the end of the day, it was satisfying.”

She didn't use fake tears to cry, so for intense scenes director Peter Sullivan would leave Song alone on set to get where she needed to be emotionally. "I spent so many hours on that set feeling sad because I had to get into that place of fear and anger," Song told Decider.

The experience wasn't as traumatizing as it might seem, because Song connected with Mike Vogel, who plays Russell, off-screen. “It’s hard to do a film like this with someone that you don’t trust,” Song said. “By the end, we were having a hard time being angry at each other. We kept laughing during intimate scenes."

It's good to know the actors got along so well. But to find out what happens to Jennifer and Russell you have to watch Secret Obsession.