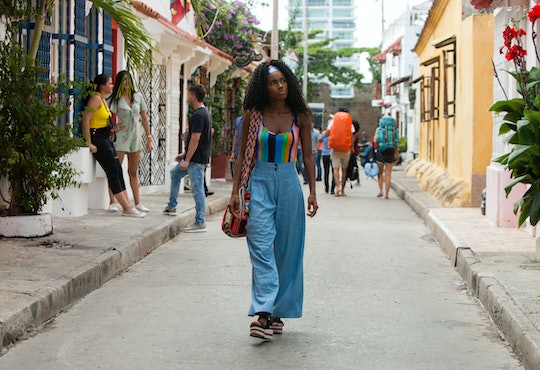 If you can't get enough supernatural content in your TV habits, then feast your eyes on Siempre Bruja. The new Netflix series features an Afro-Latina leading actress named Angely Gaviria as its titular time-traveling witch, but since the American version is dubbed, fans may be wondering: where is Siempre Bruja set? The series was developed and made in Colombia.

Siempre Bruja, listed in English as Always a Witch to American Netflix viewers, takes place in picturesque Cartagena, which is port city on Colombia’s Caribbean coast. It opens on Carmen, a 19-year-old Afro-Colombian slave and witch who is about to be burned at the stake for falling in love with a white man named Cristobál. The time period is 17th century colonial Colombia, but an old wizard steps in and asks Carmen if, to spare her from her fate, she'd like to travel to a time when no one believes in witches. She agrees (obviously, because flames), and instead of burning, she's transported to present-day Colombia. The catch is, in exchange for walking away with her life, she's not allowed to use her powers ever again. But, of course, she's a young witch and doesn't exactly have control over them just yet. She tries her best but her present day friends still find her, among other things, levitating in her sleep. Carmen realizes that her promise turns out to be harder to keep than anticipated. Once a witch — well, you know where this is going.

Despite her cruel punishment, Carmen really was in love with Cristobál and is determined to find her way back to him through time. If her powers turn out to be the only way to do it, well, so be it. Unfortunately, she has some very modern obstacles in her way, like, uh, WTF is an "app," and also: cars? And kitchen sinks? Of course, Carmen does find loyal friends to help her out and she eventually figures out that there's a powerful but sinister figure named Lucien who can get her back to her lost love. The ten episode first season is inspired by the 2015 novel Yo, Bruja, by Isidora Chacon, according to Netflix.

While the Spanish language trailer is fitted with English subtitles, the full series on Netflix is entirely dubbed in English for the non-Spanish speaking among us. But the story is exactly the same as what Spanish speaking audiences are hearing. In addition to coming from a Colombian production team, the series also has some formidable Latinas at the helm.

Liliana Bocanegra (La Esclava Blanca, Made in Cartagena, Celia) is one-half of Season 1's directing duo and Ana Maria Parra (Cuando Vivas Conmigo, La Nocturna) is the series' head writer, according to Netflix. The series also boasts Maria Cervera and Juliana Barrera as producers, so it seems like Netflix is committed to not only developing a series with strong Latinx influences, but also actually placing Latina women in positions of power. Siempre Bruja: Always a Witch is currently streaming on Netflix.