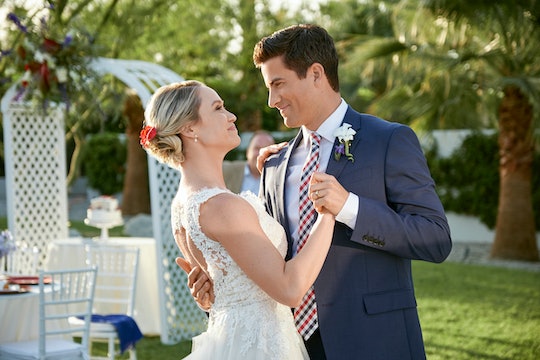 One of the best characters a movie can have is the setting. If there are mountains peering over a lake, it gets an instant swoon. A sunset over the beach coast? More swoon. As Hallmark continues their June Wedding movie series, fans will want to know where Sister of the Bride is set. With so much romance under the summer sun, this one's about to change the way you think about 4th of July weddings.

The Hallmark synopsis of Sister of the Bride says the vacation home where two sisters both want to host their weddings is set in Palm Springs. My first assumption was Palm Springs, Florida, but the movie's promo trailer shows mountains in the backdrop, so my guess is that this movie takes place in Palm Springs, California. However, as past Hallmark movies have proven, just because the wedding is set in this location, it doesn't mean that's where it was filmed. In fact several of the network's movies have filmed in areas in and around British Columbia, Canada. As far as I can tell, Sister of the Bride was actually filmed in Palm Springs, California. Take a look at the trailer and breathe in those palm trees and California sunshine.

Palm Springs is the 10th largest city in California and popular with tourists. There are great hiking trails, new hotels and dining options, and now, filming on location. What isn't there to love?

Now that you know the "where," Sister of the Bride follows the relationship of Stephanie (Becca Tobin) and her new fiancé Ben (Ryan Rottman), whom she became engaged to after only six months of dating. They make a trip to their parents' vacation home in Palm Springs where they hope to share the news with Stephanie's family. There's only one small caveat: Stephanie’s sister, Tracy (Chelsea Gilson), and her new fiancé, Preston (Brad Benedict), have also just become engaged. Both sisters want to have their wedding on the 4th of July at the vacation home. Because, of course they do. But, both learn their parents have accepted an offer to sell the house which means only one sister can go ahead with wedding plans for the 4th.

Add in the fact that Dad (Michael Gross) isn't too keen on Stephanie and Ben's rush, Stephanie's ex-love showing up at the exact wrong time (why though, man?), and major career opportunities that threaten to break Stephanie and Ben apart for good, and you've been gifted the perfect summer Hallmark movie. Being the good sister she is, Stephanie lets Tracy save the date and location, and throws herself into helping it all pan out, while the plot continues to thicken with glitches, malfunctions, and all-around shenanigans that come in the form of the universe taking control of the situation. If it sounds hella stressful, it is — but in the most rom-com way ever. Palm Springs may not have been ready for all of that, but it's the real MVP, nonetheless.

Now that you're fully aware of Sister of the Bride's location, you're free to emotionally invest in the story of the engaged sisters. I can't tell you how this all ends, but I have a feeling there will be some major Palm Springs cyber stalking and vacation planning as soon as it airs.