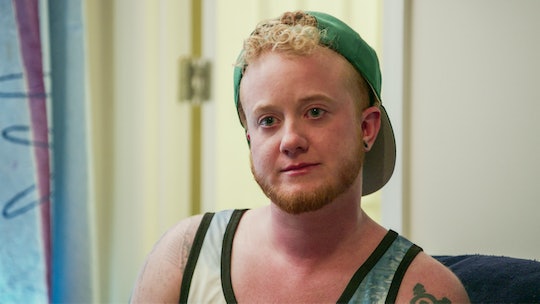 Spoilers ahead for the fifth episode of Queer Eye Season 2. The second season of Queer Eye had a lot of inspiring heroes, but one stand out was Skyler, a transgender man who recently got top surgery (the removal of the breasts). Although the Fab Five — Bobby Berk, Karamo Brown, Tan France, Antoni Porowski, and Jonathan Van Ness — helped Skyler, it's clear they also learned a lot from him too. Now fans are wondering where is Skyler after Queer Eye?

When Queer Eye first aired 15 years ago it was called Queer Eye for the Straight Guy, but in the show's revival the Fab Five have broadened their horizons from just helping straight guys to helping everyone. This was clear in the premiere episode of the second season, which featured the series' first woman, Tammye, and then later in episode five with Skyler.

The episode began with the Fab Five watching Skyler undergo his top surgery, and when they arrived at his door he was only six weeks post-op. While he recovered from his surgery the guys got to work, giving Skyler a makeover. In the episode, Skyler revealed that he's an events manager at the University of Georgia by day, but he also performs as a drag king. Skyler's very involved in LGBTQIA+ activism in his community near Atlanta, which is evident by looking at his Instagram page.

In his bio, Skyler identifies himself as a public speaker, activist, mentor, coordinator, and entertainer. The entertainer part was definitely evident in his episode of Queer Eye, where he had a party to celebrate his top surgery at his favorite bar with all of his friends. "Without all of the kind of rallying behind me...I wouldn't have been able to get my top surgery," he said on the show. It was with the help of his community that he was able to raise $8,000 for his operation.

On the show, Skyler also revealed that he went through some major complications with his anesthesia during the surgery, which created a need for follow-up procedures and more recovery time. Skyler appears to still be recovering, but based on his Instagram he's remaining upbeat and positive, while also encouraging others on their own journeys.

Skyler uses his Instagram to share his transition journey and the progress he's made. He regularly shares photo updates and recovery progress, showing that while the process may not be easy, it's worth it for him. He also revealed since Season 2 of Queer Eye dropped he's received a lot of support from others as well.

"Thank you WORLD so much for all the love on my @queereye episode on @netflix so far!" he wrote in the caption of a recent post. "Truly overwhelmed in the best way by all the messages filled with love and support from all. And the messages from my Trans* [sic] brothers and sisters have moved and motivated me beyond belief. I see you! And I love you!"

It's clear that Skyler is doing well since his time with the Fab Five, and hopefully this is only the beginning for more great things to come for Skyler. His work with the LGBTQIA+ community is invaluable and it's amazing to see him continue to work hard for the rights of others, while also going through his own journey. His episode brought a lot of viewers to tears and it's easy to see why. Skyler's story is inspiring and it'll be great to see what's next for him in the future.

You can watch the rest of Queer Eye Season 2 on Netflix now. Don't miss it!