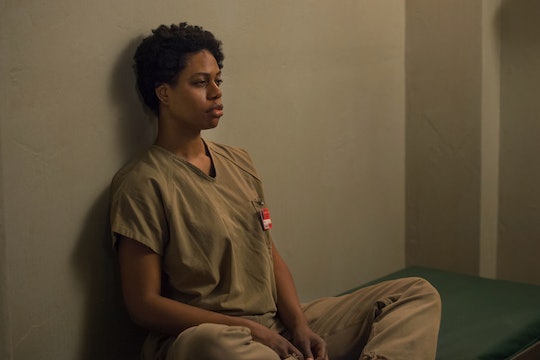 Where Is Sophia On 'Orange Is The New Black' Season 4? Her Story Is Important

Sophia Burset has been a hugely popular character on Orange Is The New Black since her first appearance, and with good reason. She's bold, strong, and vibrant, and she usually finds a way to stay above the fray in the prison. She's also an important character to have when there are so few trans characters represented in media, and even fewer played by trans actors and actresses. Laverne Cox has made as big a splash as Sophia herself, and the love fans have for both actress and character have made it difficult to deal with the darker aspects of Sophia's storyline. Sophia had been doing okay in prison despite setbacks like being denied medication and struggling to connect to her family on the outside, but in Season 3 things got a lot worse for her and she ended up being sent away. Where is Sophia on Orange Is the New Black Season 4?

Sophia began the show's third season by bonding with inmate Gloria over the fact that they were both mothers behind bars with sons of a similar age. It ended up getting messy between the women, with misunderstandings blossoming into a full-fledged fight. As the feud escalated, Sophia began to be harassed and assaulted by the other inmates. Despite the fact that she had always gotten along with the other women, those incidents proved just how quickly the tide could turn. Sophia ended up being sent to SHU, though not technically for anything she did.

Sophia being sent to isolation was allegedly for her own protection, but that didn't mean it wasn't still a punishment. Sophia was the one who had to pay for the actions of others rather than the true culprits being dealt with properly by the prison. When no action was being taken to protect her, Sophia threatened to sue and that more than anything led to her being removed entirely from the situation. Though Caputo tried to help her, his hands were tied by the system – a common theme on this show. Speaking out ended up doing more harm than good.

The promo for Season 4 doesn't show Sophia much better off than Season 3 left her. She's still locked up in SHU and it looks like the experience has left her drained. As hard as it is to see Sophia in pain, that kind of experience is a reality for many incarcerated trans people. That makes it an important story to tell, even if it's a tough one to watch.