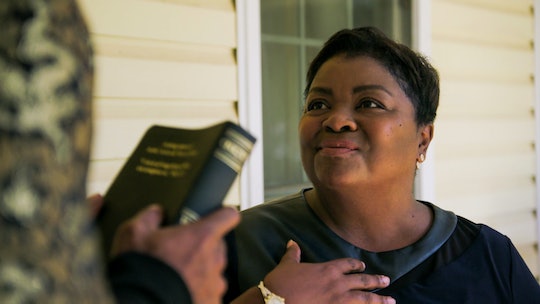 Spoilers ahead for the first episode of Queer Eye Season 2. The new season of Queer Eye started with a great hero — and the first woman featured in the revival series. Tammye Hicks is a teacher and church volunteer who was nominated by her friend and neighbor, Gene, because of her selfless personality. Fans quickly fell in love with Tammye, so it's not surprising that many are now wondering where is Tammye after Queer Eye? Surprisingly, she may have had a career change.

During the episode, fans really got to know Tammye and her story. She's a breast cancer survivor who cares deeply for her family and community. She currently lives in Gay, Georgia, a town made up of only 89 people. When the guys — Bobby Berk, Karamo Brown, Tan France, Antoni Porowski, and Jonathan Van Ness — showed up they were tasked with taking Tammye "from hot mess to Sunday best."

While the Fab Five worked with Tammye, they also renovated her church's community center. Though Tammye certainly learned a lot from the guys, they also learned a lot from her. "It's not necessarily teaching, because it's someone who has spent her whole life as a teacher, a mother, an integral part of her church," Antoni told Bustle about Tammye's episode at Netflix's Queer Eye Season 2 event in Los Angeles. "So for us to show up and just be helpers and to have someone show us such unconditional love... it was really showing up for the hero."

In addition, Tammye's episode also delved a bit into faith. Recently Tammye's son, Myles, who's gay, recently moved back in with her. Tammye opened up about how it took her some time to accept her son for who he is because of her religious beliefs. There was even a special moment between Tammye and Bobby, where they discussed feeling rejected by the church because of sexuality. Tammye then gave an incredible speech in front of her entire congregation, which led to a lot of tears.

In an interview with Huffington Post, Tammye opened up about the moment:

I never imagined standing up in front of a big gathering of people and saying, 'My son is gay. I love my son. I'm so proud of my son.' I couldn't imagine saying it even two, three years ago. When he first came out, it created a lot of friction in the house... I didn't talk about it, I said I could just cover it up. But to stand up in church and look people right in the face? That right there was a moment, you know?

Tammye also said since the show has aired she's had people thanking her for being a part of it. She's also gotten phone calls from people asking how to handle their own children coming out and said it's been a "teachable moment" for so many.

As for what Tammye's doing now, it appears she is retiring from teaching this year. Dr. Triplett, the principal of Smokey Road Middle School, where Tammye teaches, tweeted pictures from the school's retirement celebration, which included Tammye. Although Tammye hasn't announced what she'll be doing next, there is always a chance she will continue teaching.

During her episode of Queer Eye, Tammye also mentioned that she teaches through the Hospital/Homebound program for children who are sick. It's unclear if she's retired from that as well, but if she did it's likely she's still doing work with her church, St. Paul Holiness Church, which her grandmother helped to found. Tammye is an usher there and as was seen on the show, she was instrumental in creating the community center that Bobby renovated.

No matter what Tammye does next, it's clear she's doing well and that Queer Eye was an incredible experience for her and the guys. You can watch the rest of Queer Eye Season 2, which is streaming on Netflix now.