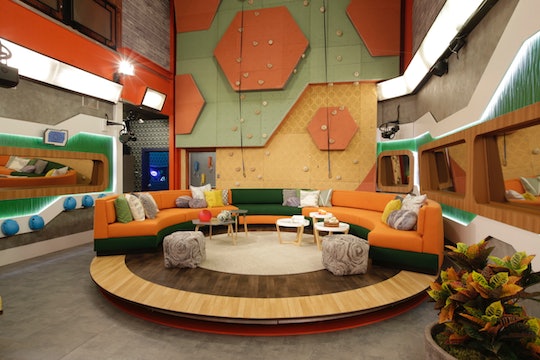 The 'Big Brother' House Has A New Theme For Season 20

Though getting to know all sixteen contestants taking up residence in the Big Brother house is the most important part of watching the show, the house itself is pretty intriguing on its own. Not only are its interiors certainly something to see, but some viewers are curious about its location too. So where is the Big Brother house? People from all different walks of life are thrown together and kept isolated within its walls, so it must be in a relatively neutral (but filming-friendly) spot.

According to In Touch Weekly, the casting site for the series gave a hint about where the house was in their FAQ section. The site stated that contestants "should be prepared to stay in Los Angeles until Mid-September 2017," so the house was likely located somewhere in L.A. That makes perfect sense considering the theme of the season is fairly specific to one West Coast locale.

Host Julie Chen took TV Guide on a tour and revealed that the theme for all the interiors was "Silicon Valley." That resulted in all kinds of technological touches throughout the rooms, with nods to emojis in the pillows and Snapchat filters built into the mirrors. That might help soothe the sting of being away from social media during the long weeks of the competition.

It seems like everything in the house has a mechanized twist. The kitchen island slides across a road printed on the floor (for some reason) and the raised platform for the living room couches actually rotates. When giving another tour to Entertainment Tonight, Chen said, "If you want to climb the rock wall there is a couch in your way, and for the first-time ever this platform spins."

That tech extends to the game itself, too. The cast "will have, for the first time ever, the capability of spying on other houseguests in three new rooms of the house where they couldn't see them before," Chen said, per CBS Baltimore. "They can't hear what they're saying but they can see." That could definitely give certain competitors an edge if they play their cards right and use the tools in the house to their advantage. Surveillance has always been a part of the series, but this takes it to another level.

Lack of privacy seems to define Big Brother 20. Contestants have to share beds, unless they're the head of household — then they get a luxurious suite all to themselves. Instead of walls there are sliding panels, making it difficult to get a moment alone. That can be frustrating enough on its own, but when part of the game involves secret planning and alliances, it's going to be even tougher with the house's new touches. But they get more sinks, so that's a plus?

In descriptions of the season, CBS made it that the house is "decked out to look like the fun, colorful, and creative interactive spaces on tech campuses in Silicon Valley." But that doesn't mean the house itself is in the actual Silicon Valley, which is in San Francisco. If the casting information is to be believed, then Big Brother filmed in a different California location several hours south. Though San Francisco and Los Angeles are two very different cities, at least it would be marginally on theme for the house to be in the same state as its decor implies.

According to CBS Los Angeles, executive producers Allison Grodner and Rich Meehan hope the house inspires the people staying in it with its innovative details, resulting in "some state-of-the-art strategies." Regardless of where the building is situated in the state of California (or elsewhere), it's bound to have a big impact on all its guests.