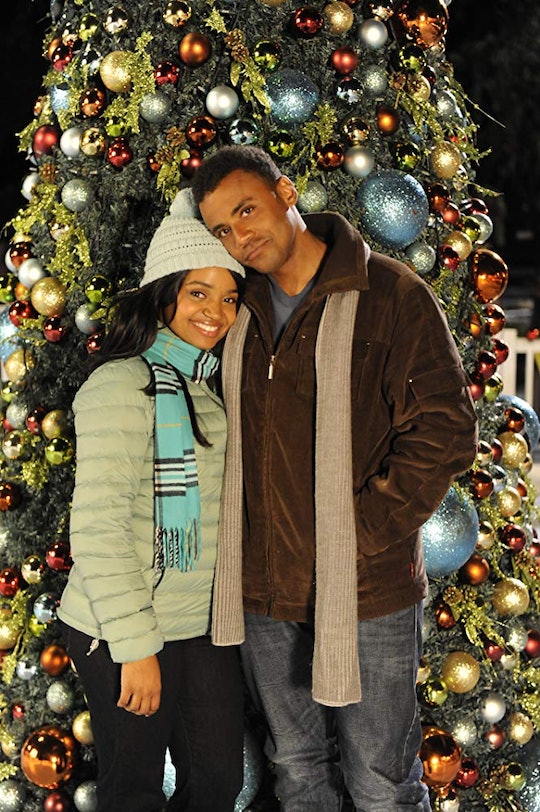 'The Christmas Pact' Has The Perfect Holiday Scenery

It's officially December, my friends. That means it's time to dive into every Christmas movie that airs to channel that festive spirit. This year, Hallmark and Lifetime stepped up their games to bring you all the joy you've ever dreamed of. Such is the case for Lifetime's The Christmas Pact with its adorable story of friends to more than friends. So with the movie's winter wonderland scenery, you may be wondering: Where is The Christmas Pact set?

Though Lifetime's official trailer for The Christmas Pact shows a few key scenes with Christmas-inspired decorations and greenery, there doesn't seem to be much else to be found. Actually, it's the official The Christmas Pact website and an IMBD page that says anything at all — which can only mean you're in for a real treat when you finally see the original TV movie when it airs. As you can see through the preview, there's snow, ugly Christmas sweaters, some sort of holiday festival, and mistletoe. These are all things that can happen pretty much anywhere it snows really, so you'll have to tune in to see if the exact location — fictional or not — is mentioned.

As for The Christmas Pact plot itself, the theme is tried and true — can friends fall in love. Sure, it's been done before, but has it ever involved a secret pact? OK, so maybe, but even still. The Christmas Pact stars Kyla Pratt as Sadie and Jarod Joseph as next door neighbor Ben. When the two are a mere 8 years old, they plant a tiny, but strong, 3-foot tall Christmas tree somewhere behind their church. This is where they promise to return every year — hence the pact — as part of their friendship. Of course, life gets in the way. The pact becomes something that could break Sadie and Ben's friendship, if not nurtured. Insert a little Christmas magic, because every holiday movie needs some.

Once the magic happens, Sadie and Ben recommit to the pact. Because of this, the Christmas tree grows, and their friendship blossoms into something more. Sounds like the perfect ending to a long, cold day of shopping or time with family and friends. The setting may be Anywhere, U.S.A., but in your heart you can imagine it's right outside your back door. Maybe you have your own Christmas tree to plant in honor of the film, and maybe you have your own best friend to make a pact with in the spirit of the season.

As for the movie's star, Pratt, when she's not filming feel-good Christmas movies, you can find her acting in other roles such as Recovery Road, Let's Stay Together, or her voice as Penny Proud in the animated TV series, The Proud Family. Meanwhile, her costar, Joseph has a long list of acting credits to his name as well. Whether it's The 100, Saving Hope, or Once Upon A Time, Joseph's resume rivals Pratt's in the best of ways.

So maybe there's no exact location mentioned in the promos for The Christmas Pact, but that doesn't mean the setting isn't the most glorious place on earth. At least as far as these two characters are concerned.