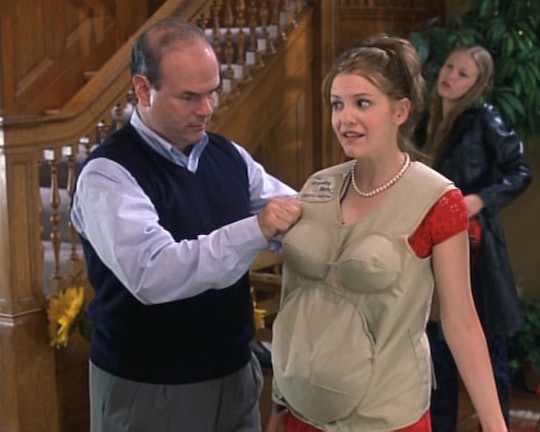 Where Is The Dad From '10 Things I Hate About You' Now?

When it comes to late '90s teen movies based on Shakespearean plays, 10 Things I Hate About You is a classic. Starring Heath Ledger, Julia Stiles, and Joseph Gordon-Levitt, this movie brought the Bard's The Taming Of The Shrew into high school. Chances are, you have a good idea about what happened to the younger cast members, but where is the dad from 10 Things I Hate About You now? Some of his recent roles may surprise you.

Larry Miller played the role of Dr. Walter Stratford in 10 Things I Hate About You, the overbearing father who restricted his teenaged daughters' dating lives. His strictness comes from a good place: as an OB-GYN, he often treats pregnant teenagers, and he wants his own daughters to avoid that fate. But thanks to his well-meaning overprotectiveness, he makes the dad from Footloose look positively chill.

Since his role in 10 Things I Hate About You, Miller has taken on a variety of other jobs. According to his IMDB page, Miller has worked on several other films, including Nutty Professor II, Best in Show, A Mighty Wind, Bee Movie, and Kiss Kiss Bang Bang. And he has positively torn up the small screen. As further noted on his IMDB page, Miller has appeared in DAG, Providence, My Wife and Kids, Law & Order, 8 Simple Rules, King of the Hill, Desperate Housewives, Medium, Monk, Burn Notice, Gravity, Curb Your Enthusiasm, and Comedy Bang! Bang!, among many others. Basically, if you have watched a TV show in the past 20 years, Larry Miller probably had a role in it.

But perhaps his most interesting turn included a revival of his role as Dr. Walter Stratford. In 2009 to 2010, ABC ran a television series of 10 Things I Hate About You, and Miller was the only member from the film cast to reprise his role. As noted in IMDB, he appeared in 20 episodes of the show's two-season run.

With all of the '90s nostalgia and reboots going on now, it may be time for a new film version of 10 Things I Hate About You. This is fitting; after all, the original film was a sort of reboot in its own way. The rest of the cast may be up for debate (I could see a Kardashian or two getting involved), but the role of Dr. Walter Stratford belongs to Larry Miller.