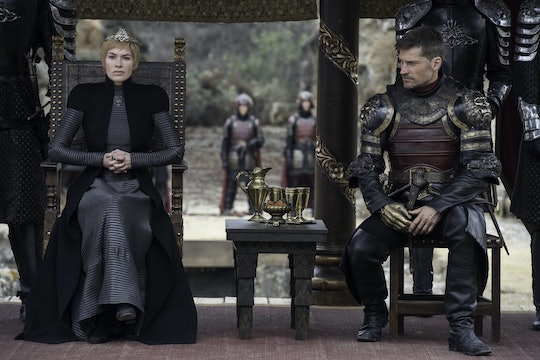 'Game Of Thrones' Is Heading To The Dragonpit

According to previews for the Game of Thrones Season 7 finale, it looks like the episode will center around the much-anticipated meeting of Daenerys Targaryen, Jon Snow, and Cersei Lannister. Tyrion and Jaime will also be in tow, of course, as well as all of the relevant advisors to all the rulers in question. And where will this dramatic meeting take place? Daenerys seems skittish about setting foot in The Red Keep, so it looks like they're all meeting in the Dragonpit ruins of King's Landing. So where is the Dragonpit on Game of Thrones? Much like its name suggests, the massive structure was once a "stable" that housed Targaryen dragons.

The Dragonpit is located at the top of Rhaenys' Hill in King's Landing, with forty chambers for nesting dragons carved into the hill underneath. Rhaenys' Hill is located on the opposite side of the city from Visenya's Hill, which is where the Sept of Baelor once stood. To the south of Rhaenys' Hill is Flea Bottom and to the north of it are the Streets of Silk, AKA the red light district where the brothel is. No one has ever used the Dragonpit for anything since its destruction 170 years ago, during the civil war between Targaryen families known as the Dance of the Dragons.

Hence, the Dragonpit's remains look like the ruins of an old colosseum, which is exactly what it was intended to be. In addition to housing the Targaryen dragons when such creatures still existed, the domed structure contained rows of stone benches which could accommodate a crowd of up to 80,000 people for public spectacles, like, for example, the funerals of dead Targaryen kings.

But during the Dance of the Dragons, when just five Targaryen dragons remained, a mob of thousands stormed the Dragonpit to try and kill them — the symbol of the Targaryens' omnipotent power. Thousands of people died, but since the dragons had been growing smaller and smaller and three of the five weren't yet full grown, the riot managed to kill all five of them. The structure burned and crumbled as the dragons tried to defend themselves, with one, a dragon named Dreamfyre, finally crashing into the domed ceiling in a final attempt at escape. It wound up killing itself and many humans as the entire ceiling caved in.

The Dragonpit scene filmed on location in the Italica ruins near Seville, Spain, which many fans are quick to point out isn't anywhere near big enough for actual dragons to enter. The show will likely have to make do with some visual tricks to make the ruins look more expansive than they really are.