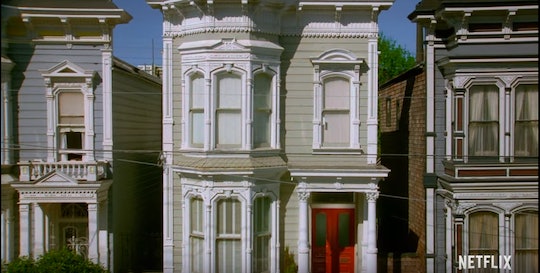 Where Is The 'Full House' House? Visit It Just In Time For The Premiere Of 'Fuller House'

Remember the Tanner household? Between Uncle Jesse's sweet digs in the attic and that big shared room between DJ, Stephanie, and Michelle, what '90s kid didn't want to live there at some point during their childhood? (We all did; stop lying.) The home looked huge, inviting, and exactly like a place you wanted to grow up in. Not to mention, it was set in the beautiful city of San Francisco. Viewers knew what it looked like, of course, due to the credits that played in the beginning of every episode, closing in on the outside of the home as the final shot. But even though you know the city, where is the Full House house? Well, the good news is that you can visit it just in time for the premiere of Fuller House in two weeks.

OK, here's the deal: The house is located in San Francisco, California on 1709 Broderick Street and in the Lower Pacific Heights neighborhood of the city. Better yet, the Full House home is considered to be an actual sight to see in the famous city.

The exterior of the home is so famous, in fact, that it has its own Yelp page, where people leave glowing reviews of the privately owned residence — yep, seriously. It currently has 3.5 stars on Yelp, so interpret that as you wish. Trip Advisor also has it ranked as the 45 best thing to do in the city, out of 483 things to do. The home also has its own Facebook fan page and websites dedicated to determining the home's floor plan.

Recently, the owners of the home put a coat of purple paint up to disguise the home from tourists, but a little coat of the eggplant hue hasn't been able to mask the famous home from those still wanting a glimpse at it.

While the real Full House might not actually look like the famous home on the inside, it's still pretty much the same on the outside, purple paint and all. The interior of the home was actually shot in front of a live studio audience. The home is not to be mistaken as one of the famous Painted Ladies, located a few blocks away on Steiner Street in San Francisco. The Painted Ladies are a series of colorful victorian homes that are hugely famous San Francisco landmark and are also featured in the establishing credits of Full House.

In 2010 a house on Steiner Street that was mistaken for the Full House home was put up for sale for a cool $4 million dollars. Wonder if Danny Tanner could afford that with his pay check from Wake Up San Francisco?