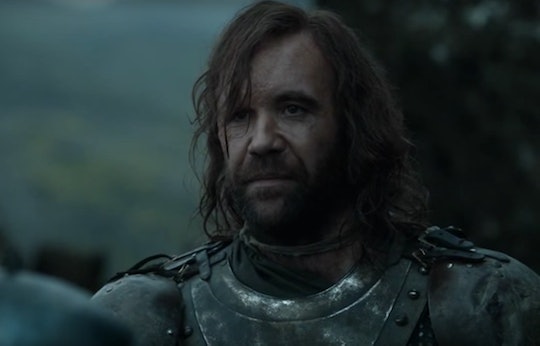 Where Is The Hound on 'Game of Thrones'? The Gravedigger Theory Suggests A Return

Basically, in the series, when Brienne and Podrick are wandering through the Riverlands for 40 years looking for Sansa, they come across a monastery, where a monk named Septon Meribald tells her he found The Hound as he was dying. He also says that The Hound "died that day" and Brienne sees a new monk with a limp and a shrouded face digging a grave. This passage has been interpreted to mean that Meribald found The Hound before he died, saved his life, and rehabilitated him in The Faith. When he says The Hound died, he means his persona as a warrior, not necessarily that Sandor Clegane is dead.

Fueling this theory is a Game of Thrones Season 6 casting call included a breakdown for a priest character, the fact that Rory McCann (who plays The Hound) has been spotted in Belfast where the show shoots, and that he was reportedly staying in the same hotel as the other Game of Thrones actors. It seems like his return to the show is all but a sure thing.

Plus, fans are eagerly still awaiting #Cleganebowl now that The Mountain is alive and well. (Okay, maybe not "well," but undead anyway.) This much-memed theory posits that The Hound will return to the show to fight his brother and the cause of his horrific facial scarring, Gregor. Well, The Mountain is on the verge of facing another trial by combat for Cersei, and The Faith doesn't have a fighter in the ring yet. And The Hound might be a monk now, who just so happens to have a strong combat CV. You guys. Cleganebowl is coming.