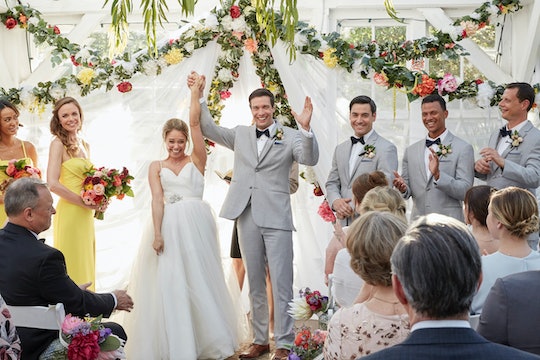 If "Never A Bride" Hits Close To Home, Hallmark's 'The Last Bridesmaid' Gets You

With wedding season in full swing, Hallmark is rolling out their best wedding-themed content. One thing that draws me into a good rom-com is the setting and this network never steers away from the most gorgeous locations. So, where is The Last Bridesmaid set? It's in the June Weddings lineup, so clear your schedule now.

Though some Hallmark promos hint at the fictional (or real location) the characters' stories will unfold, The Last Bridesmaid could be set literally anywhere. I did the research, watched all the promo videos, and still can't locate anything specific. However, there's one brief mention in the "On Location" clip where lead actress and executive producer, Rachel Boston, mentions Victoria. I assume she was referring to the actual film location, which could very well be Victoria, Canada. That would gel with other recent Hallmark film locations. Canada seems to be a popular place due to the gorgeous mountains, lush forestry, and glistening bodies of water all within the span of one scenic spot.

If my guess is correct, The World Atlas says Victoria is the fourth biggest city in British Columbia as the capital, and is known as the "Garden City." The site also says Victoria attracts a lot of tourists due to its "picturesque historic city center, with imposing British Columbia Parliament Buildings and the contrasting elegance of the gothic Christ Church Cathedral." Overall, if this is actually where The Last Bridesmaid is set, I can see why. With the mildest climate in all of Canada, and so many flower beds the city counts and totals them each year, I'm sure it'd make for a great backdrop to this love story.

Now that you have an idea of where this film might be, let me tell you what it's about. The synopsis on the Hallmark website says this one's about an unlucky-in-love but hopelessly romantic woman named Becca Foster. She's about to be a bridesmaid for the 10th time (yikes) in her cousin Lucie's wedding. She's not exactly looking for love, and thinks it'll find her when the time is right. Cousin Lucie has other plans when she tries to set Becca up with the best man, but Becca and videographer, Kyle (Paul Campbell) start to feel all the feelings during the filming of the wedding events in the weeks leading up to the wedding.

Though Becca and Kyle don't see eye to eye on everything, they find comfort in the way each challenges the other to follow their dreams. Things get a little dicey when there's a misunderstanding — I hate those — but Becca makes the toast of the century during the wedding reception that, hopefully, speaks to Kyle's heart. There may still be no word on where this is all happening, but it won't matter. You'll be too invested in the budding romance to care. The Last Bridesmaid is the perfect wedding season movie, IMO.

I feel like I've let you down by not locating the exact set location of The Last Bridesmaid. It's possible filming did, in fact, take place in Victoria, British Columbia, while the setting in the movie is pure fiction. This is something Hallmark has done in the past, and likely is the case again. And anyway, it's possible to enjoy the scenery without knowing everything about it. So sit back, relax, and take this movie for what it's worth. Everything else will be revealed in due time.