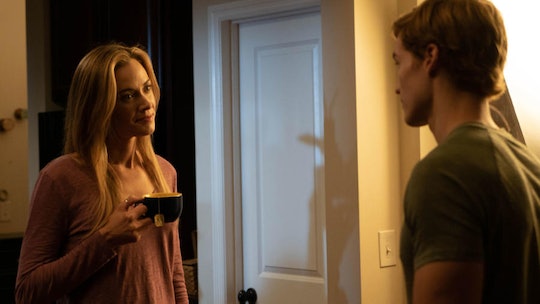 Settle in because Lifetime has some more thrilling melodrama in store July 20 with the premiere of The Madam Of Purity Falls. I don't know about you, but the end of that title sticks out to me the most. Is Purity Falls a theme park? A mindset? A town? All of these options feel like possibilities, so I wonder — where is The Madam Of Purity Falls set? The answer might clear up some mystery. Then again, it might just deepen it.

As the title of the movie suggests, The Madam Of Purity Falls is set in Purity Falls. The name of the town sounds fake because it is. I googled it witH all different phrases and the only hits refer to this movie. That makes sense, because it doesn't sound like a particularly fun place to visit to me. But names can be deceiving.

As per Lifetime's official synopsis of the film, viewers are in for a story about a new widow (Kristanna Loken) who moves to the town of Purity Falls to reconnect with her teenage son and daughter "only to find the rift with her son deepen when he becomes entrapped in the neighborhood maven's nefarious home business." Hmm. Intriguing.

What exactly is this mysterious business, you ask? Why, landscaping of course! But this is a Lifetime movie, so along with trimmed hedges, the women can order up a man to satisfy their most impure desires. You're not surprised, right?

A peek at the trailer proves that poor Benjamin (Kendall Ryan Sanders) is surprised indeed. It's going to take some — shall I say "training" — before he becomes comfortable with his job. Of course, his clientele is delighted to encourage him. "You don't have to be afraid of pleasure," one client assures him.

That may be true. But he's in the business of helping wives cheat on their husbands, so he definitely has something to be afraid of. Or more accurately — someone. The Madam Of Purity Falls is definitely not a romance movie. It's a thriller, and someone definitely falls into a pool after being punched at some point. This is just a guess, but I'm thinking at least one husband is going to uncover Courtney's (Olivia d'Abo) business. Benjamin might suffer the consequences of that. I shudder to think about what those may be.

Purity Falls star Loken isn't as well-versed in playing a mother on-screen as she is in playing an action hero. You may have seen her in her element in films like Terminator 3 or Black Rose. But in real-life she became a mother to son Thor in 2017. Of the experience, she told Skynet, "Motherhood is the most incredible role I will ever have. Every choice and decision carries much more weight as I’m directly influencing my son." She continued, "I have grown exponentially from this experience thus far, and feel that Thor is my teacher & I am the student."

On screen in Purity Falls her son Benjamin definitely has a lot to learn. I just wish I didn't have the creepy feeling that one of his lessons is of the life-or-death variety.