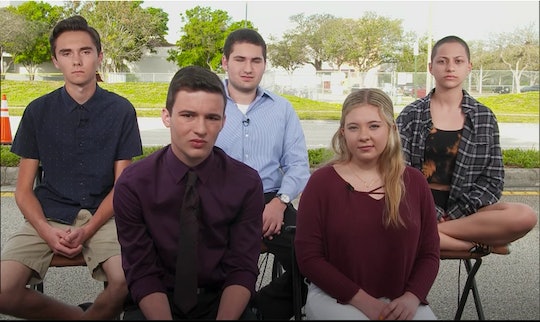 In the wake of the latest mass school shooting, students are taking action to send a powerful message: Enough is enough. It was on Valentine's Day that a 19-year-old killed 17 students and teachers at Marjory Stoneman Douglas High School with a semi-automatic assault rifle. Understandably, the Parkland, Florida, community remains shocked and devastated by this unimaginable act of violence. However, five students who survived the shooting are channeling their grief and anger to bring about real change. But where is the March for Our Lives? The movement seeks to bring change to gun safety laws.

On Sunday, five high school students — Jacqueline Coren, Emma Gonzalez, Cameron Kasky, David Hogg, and Alex Wind — announced they were organizing a protest they've called March for Our Lives. The march will take place on March 24 in Washington, D.C., reported ABC News. That morning, students and allies will gather on our nation's capitol "to demand that their lives and safety become a priority," and to once and for all "end gun violence and mass shootings in our schools," the network reported. “People keep asking us, 'What about the Stoneman Douglas shooting is going to be different, because this has happened before and change hasn't come?' This is it," Kasky told ABC News. The 11th-grader added:

People are saying that it’s not time to talk about gun control. And we can respect that. Here’s a time. March 24th in every single city. We are going to be marching together as students begging for our lives.

Kasky explained the march isn't specifically a protest against the GOP or for Democrats. It's about those who have it within their power to initiate change. "This is about the adults. We feel neglected and at this point, you're either with us or against us," he said, according to ABC News. Kasky added:

Any politician on either side who is taking money from the NRA is responsible for events like this. At the end of the day, the NRA is fostering and promoting this gun culture.

On Saturday, another one of the march's organizations, Emma Gonzalez, gave an impassioned speech at a gun safety rally, Vox reported. “Politicians who sit in their gilded House and Senate seats funded by the NRA telling us nothing could have ever been done to prevent this, we call BS,” She added:

March for Our Lives has already gained momentum. In fact, George and Amal Clooney decided to donate $500,000 to the March for Our Lives, reported E! Online. "Amal and I are so inspired by the courage and eloquence of these young men and women from Stoneman Douglas High School," George told E! Online on Tuesday. He continued:

Our family will be there on March 24 to stand side by side with this incredible generation of young people from all over the country, and in the name of our children Ella and Alexander, we're donating $500,000 to help pay for this groundbreaking event. Our children's lives depend on it.

For those who are inspired to take action but can't make it to the March for Our Lives in Washington, D.C., there is another opportunity to get involved, NBC reported. Women's March Youth EMPOWER is calling for a national school walkout on March 14, during which students and staff from across the nation will walk out of their classrooms for 17 minutes, starting at 10 a.m. EST, according to a statement from the organization.

Even after these demonstrations have passed, we need to keep the conversation going. We cannot forget the innocent lives who have been lost — at the hands individuals who shouldn't have had access to a semi-automatic weapons in the first place.