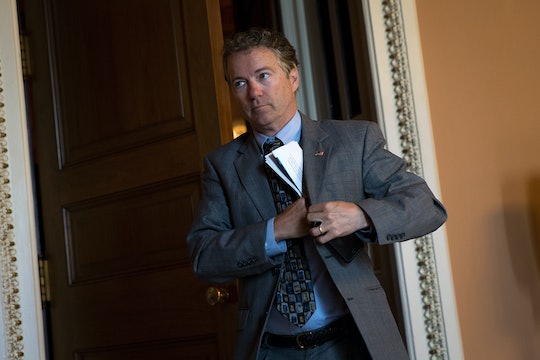 Apparently it's congressional scavenger hunt team building day at the Capitol, because Kentucky Sen. Rand Paul has been on a wild goose chase much of Thursday morning. The prize he's after? The GOP's long-promised replacement bill for President Obama's Affordable Care Act, more commonly known as "Obamacare." So, where is the Obamacare replacement bill? Turns out, it's been hidden and being kept "under lock and key," according to Paul on Twitter Thursday afternoon. Even more alarming, once Paul finally found it, he wasn't allowed to take it out of the room or make any part of it public, according to POLITICO. Um, what? What is going on?

Paul began live-tweeting his Obamacare treasure hunt at just before 10:30 a.m. Eastern Time. "I have been told that the House Obamacare bill is under lock & key, in a secure location," Paul tweeted. He continued that it was "not available for me or the public to view." Paul was having none of this, so he took matters into his own hands. "I am heading to the secure location where they are keeping the House obamacare bill," Rand tweeted immediately after. "I will demand a copy for the American people."

I am genuinely unsure if our Congress has momentarily turned into an episode from the upcoming season of House of Cards. Here's the complete play-by-play of Thursday morning's very bizarre, Benny Hill-esque chase scene on the Hill.

Or, to put it more simply:

The location of the actual House Obamacare replacement bill appeared to be as much of a mystery as the contents of the bill itself.

But then Ryan and several reporters catch a break.

Even though Paul managed to find the room where the bill was probably being kept, he apparently didn't know the secret GOP handshake that gets him into the room.

Ryan tries another tactic. If he can't go in, could the staffer perhaps give him a copy of the bill to look at... and make copies of?

This staffer is having none of it right now.

Left with few choices, Paul did the next best thing he could in the moment: He held a press conference right there in the hallway.

He was not pleased about the endeavor to find the House version of the Obamacare bill took him over an hour — and he still hadn't seen the bill.

Even then, as other members of Congress sought to find the bill with him, they couldn't find it, either.

Paul has introduced his own Obamacare replacement bill in the Senate but appears to have been shut out trying to view the version being drafted by his GOP House counterparts. You would think, after eight years of saying how awful the Affordable Care Act was, that they might have a backup plan ready to go from day one of a GOP-controlled Congress and a new Republican president. Obviously, that's not the case — but after Trump said last month that "repeal and replace" should happen by 2018, the clock is on for the GOP to get their act together and produce that "better plan" they've been going on about for eight years.

And yet, even after it became known that a copy was available, even members of the Senate GOP couldn't find it, as Paul's wild goose chase revealed. It should be called Schrödinger's Bill, because either it exists or it doesn't; it can't be both at the same time — but we won't know until we actually see it for ourselves. But I'm not sure which is worse: that it doesn't exist at all, or that is does, and the GOP is refusing to share it with the American people (who will have to see it eventually).

Guys, this is a really weird season of House of Cards.