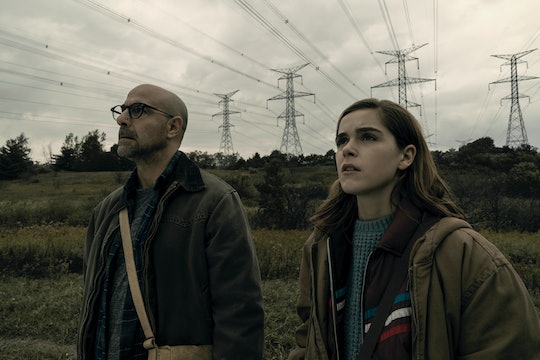 With the release of Netflix’s new film, The Silence, horror fans are getting a new movie to put on their watchlist. The film tells the post-apocalyptic story of a family trying to find refuge from deadly creatures who hunt humans through sound. The story takes place in suburban America, which makes it both relatable and terrifying at the same time. So viewers may be wondering, exactly where is The Silence set?

According to a Netflix synopsis, The Silence begins in suburban New Jersey. The story is centered around 16-year-old Ally Andrews (Kiernan Shipka), a young woman who lost her hearing in a car crash that killed her grandparents three years earlier. Ally realizes that after losing her hearing, her other senses have become more heightened, and she is able to utilize them when bat-like creatures called “vesps” begin attacking humans using sound. Along with her father Hugh (Stanley Tucci) and mother Kelly (Miranda Otto), Ally goes on the run, trying to find a safe place, free of sound.

“As she and her family race to seek refuge away from their home in the New Jersey suburbs, they find that their past tragedy becomes their current strength,” read the Netflix synopsis. “They can communicate in near total silence by using sign language. But amid the quiet chaos, they learn that humans can be just as dangerous as Vesps when they cross paths with The Hushed, a sinister cult who are eager to exploit Ally’s heightened abilities. As the Andrews family struggles to stay one step ahead of their many attackers, they quickly learn that they’ll have to adapt to survive.”

While the film is set in New Jersey it wasn’t actually filmed there. According to a Netflix press release, The Silence was filmed in Toronto, Ontario. The film’s director, John Leonetti, worked with director of photography Michael Galbraith and production designer Bob Ziembicki to create a set that mimicked the bustling suburb of New Jersey. “Set in contemporary New Jersey just 20 miles outside of New York City, The Silence begins in a recognizable, modern world pulsing with noise — school buses honk, dogs bark, high schoolers jeer,” reads the Netflix press release, with Ziembicki adding how he aimed to keep the aesthetic of the movie relatable.

“We wanted to keep the look and environment as authentic as possible to make it believable for the audience,” said the production designer. “This is a timely, contemporary story – things can change dramatically in an instant, and I think our story questions and addresses how prepared we are to survive in the modern world when things go south.”

The Silence — which is based on a 2015 novel by author Tim Lebbon — is being compared to movies like A Quiet Place and Bird Box — films that are also set in a recognizable post-apocalyptic world featuring dangers based on human senses. With the popularity of these movies, it’s safe to assume that horror films are moving towards more relatable and realistic aesthetics, and as a horror fan myself, I think it’s a refreshing change for the genre.

The Silence is currently streaming on Netflix.