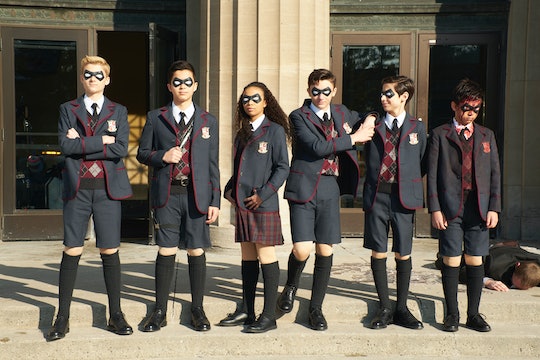 Netflix’s new series, The Umbrella Academy, tells the story of seven siblings who — after spontaneously being born to different women around the world on the same day — were adopted by a billionaire and trained to save the world. The siblings reunite when their father is mysteriously murdered, and they gather at their palatial family home. Aesthetically, the series is dark and rich, which has fans are wondering: where is The Umbrella Academy set?

While the series doesn’t name the home city of The Umbrella Academy mansion, Atlas of Wonders reported that the show was mostly filmed in Ontario, Canada. The building used to film the entrance of Sir Reginald Hargreeve’s mansion — homebase for the Umbrella Academy — is a building located in Hamilton, Ontario, and the skyline shown in Episode 1 is an altered photo of the Port Lands in Toronto. The outlet reported that most of the other major locations in the series — including the doughnut shop, the auditorium where Vanya plays, and Meritech headquarters — were filmed in notable locations around Ontario.

Throughout the series, the six Hargreeve siblings — Klaus (Robert Sheehan), Number Five (Aidan Gallagher), Luther (Tom Hopper), Allison (Emmy Raver-Lampman), Vanya (Ellen Page), and Diego (David Castañeda) — find themselves in different locations throughout the world. In Episode 1, Luther is chilling and relaxing on the moon before heading back to Earth for his dad’s funeral, and in Episode 5, Klaus is transported to 1968 Vietnam. Number Five is constantly traveling through time and space in the series, so his locations continuously vary.

The Umbrella Academy is based on My Chemical Romance frontman Gerard Way and illustrator Gabriel Bá’s comics and graphic novels. In the comic books, the Umbrella Academy team continuously travels the world, and when speaking to CBR, Bá revealed why the story’s settings are so diverse.

“I always tried to see this comic as an opportunity to mix influences and different styles, because the story is so open that it allows all these specific motifs to work together,” Bá told CBR. “We have an amazing and diverse cast of characters, and the settings for the story should be as varied to show readers that there's not one way to draw things, one single world where everyone looks the same, where every place is the same. I think that given Gerard's sensibility, and the fact that he has traveled the world so much touring with the band – I did my share of traveling as well – and that I come from a different country and different culture, helped us bring more plurality to this comic. That is seen in the story, on the characters and on the places we show in the comic.”

So while the exact setting of the Umbrella Academy headquarters is vague in the series, there are a few Canadian locations that you might recognize. Unlike Netflix superhero shows like DareDevil, Luke Cage, and Jessica Jones — where the setting is part of the plot — The Umbrella Academy focuses more on the characters and their individual stories, and leaves things like location and setting up to the imagination.