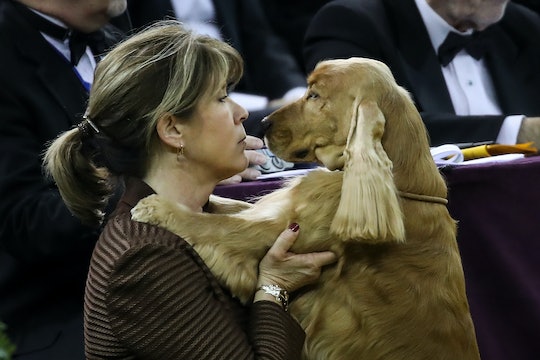 If You Want To See All The Prancing, Here's Where The Westminster Dog Show Is Held

Coming up on the middle of February, there's only one thing I care about more than discount candy, and that's the Westminster Kennel Club dog show. Who will win? Will it be another terrier? A Bichon? Personally, I'm rooting for the handlers. I mean, look at how they prance, how they gleefully pluck the nether regions of their furred companions. They don't even blink, they just reach up and grab. They're the real champions. If you want to see the dogs or the handlers, you're probably wondering, where the Westminster Dog Show is.

The show begins on Saturday Feb. 9 at Piers 92 and 94 at 711 12th Ave. at 55th St. & West Side Highway, New York City from 10 a.m. to 9 p.m. Saturday's Meet and Compete, as well as preliminary competitions, are at Pier 94, per the Westminster website. On Monday, Feb. 11, the obedience championship is at Pier 94, from 8 a.m. to 4:30 p.m. The Westminster Kennel Club (WKC) Show on Monday will have its day session at Pier 94, and the evening sessions will be at Madison Square Garden between Seventh and Eighth Avenues, between 32nd and 33rd Streets at the Penn Station-Herald Square stops. The sessions on Tuesday are also Pier 94 during the day and MSG in the evening.

If you're like me, and you're completely uninterested in the crowds of cut-throat WKC spectators but really interested in corgi butts, have no fear — it's on TV. It will play on the Fox Sports One and National Geographic channels, according to Sporting News. It will also stream online on Fox Sports One, and they offer a free seven-day trial if you want to go that route, but don't plan to watch that channel regularly.

The WKC show is the second longest running sporting event in United States history, only two years younger than the Kentucky Derby. This is the 143rd annual WKC show, and over that long illustrious history, it has gained in popularity, and is now the most-widely viewed dog competition in the world, reported People. It has inspired skits on Saturday Night Live, and even a complete mockumentary — Best in Show, starring Eugene Levy.

These dogs are at their prime, and I can't imagine judging which pup is the perfect specimen, particularly because I also cannot imagine so much shedding. Fur has got to be everywhere. If you don't mind a little fluff and you want to be there, the tickets are fairly reasonable at just between $20 and $35 dollars. Personally I suggest cosplaying your favorite breed, but that's just me. (I'd be a Rottweiler.)

So where is the 2019 Westminster Kennel Club show? It's in New York City, but it's also in the hearts of every dog-loving American, obviously. What is more quintessentially American than spending hundreds or thousands of dollars to have someone else prance around a ring like a show pony with a dog you paid hundreds or thousands of dollars to own? It's all very meta when you think about it. But it's still one of the most watchable sporting events on television in my opinion.

So get out your sensible suit and most neutral pair of easy strider walking shoes. I'm going to make some popcorn, crack open a beer, and cheer on Mr. Snigglysnoot and his handler Linda.