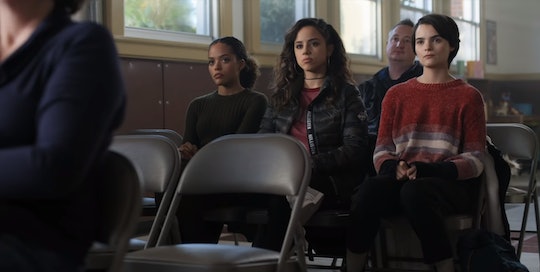 Netflix’s new series, Trinkets, is based on a 2013 novel from Kirsten “Kiwi” Smith — the screenwriter behind hit rom-coms like Legally Blonde and 10 Things I Hate About You. The series follows three high school teens who are addicted to shoplifting, and form an unlikely bond when they meet under the most awkward circumstances The teen drama features backdrop that completely fits the tone of the story, but exactly where is Trinkets set?

Just like Smith’s novel, the Netflix show takes place in Portland, Oregon. “When three teenage girls from different corners of the high school cafeteria find themselves in the same mandated Shoplifter’s Anonymous meeting, an unlikely friendship forms,” reads the Netflix synopsis for the series. “Elodie (Brianna Hildebrand, Deadpool) — the grieving misfit, Moe (Kiana Madeira, The Flash) — the mysterious outsider, and Tabitha (Quintessa Swindell) — the imperfect picture of perfection, will find strength in each other as they negotiate family issues, high school drama and the complicated dilemma of trying to fit in while longing to break out.”

When talking to Oregon Live, Trinkets executive producer Brin Lukens revealed why it was important for the series to be filmed in Portland. “Sometimes, people go on location and shoot interiors, and you don’t get a sense of the place,” she said. “For us, Portland is a character. Kiwi grew up in the Pacific Northwest, and the novel is set in Portland — I hope people will engage in the friendship story, and that people who live in Portland will feel like we tell the story of the city, and feel the city is represented.”

She told the outlet that the series was shot in and around Portland from October 2018 through Thanksgiving, and that production was lucky enough not to be doused by the city’s signature rainy weather. Most of the filming took place in and around the towns of Milwaukie and Clackamas, Lukens noted, and locations like Gladstone High School, Oaks Amusement Park, Sellwood, and downtown Portland were also utilized throughout production. In the trailer for the series, you might catch a glimpse of a few iconic Portland locations, including the Mercantile Portland store, the downtown Portland Park Blocks, and Rose City.

Trinkets has yet to be renewed for a second season, but the cast and crew is hopeful. Lukens told Oregon Live that she hopes Netflix orders the show for another season, partly because of his love for the city and its amazing food scene. “I want to come back to Portland,” she said. “And eat more Pok Pok wings.” In a separate interview with Oregon Live, actress Quintessa Swindell — who plays Tabitha — also shared her love for Portland and its vibe, admitting that “any opportunity to go back to Portland would be beautiful.”

Along with seeing Portland’s charming locations and landscapes, you’ll hear plenty of the city’s signature indie music. As reported by Bustle, local bands including Ages and Ages, Black Belt Eagle Scout, Haley Heynderickx, STRFKR, and Helio Sequence are featured as part of the series’ soundtrack.

It’s safe to say that the Portland vibe is felt throughout the 10-episode season of Trinkets, which is currently streaming on Netflix.