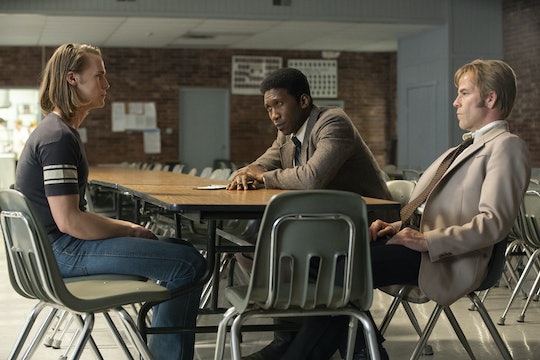 If you're a True Detective fan there's no doubt you're excited for the premiere of Season 3. A common factor in the first two seasons was the intensity of the show's setting, whether that was small-town Louisiana or gritty LA. So you may be wondering where True Detective is set this time around. It will actually be familiar, if you're into another buzzed-about crime-drama.

The incredibly talented Mahershala Ali, leads Season 3 of True Detective, which is set in the Ozarks, much like the hit Netflix series Ozark, starring Jason Bateman. Basically, the Ozark mountain area, also known as the Ozark Plateau, makes perfect sense for a slow-burning dramatic series as it is both intimidatingly large and completely gorgeous. Numerous lakes, rivers, and waterways weave throughout the scenic landscape, which makes for a pretty good crime-drama set-up, if you ask me. Just watch in the clip below and tell me that view isn't the best thing you've seen today. I mean, aside from the missing children, obviously.

So what's up with the mega-cool Ozarks everyone seems to want to use as the backdrop for their gritty crime drama? As I mentioned, it's a large area which paves the way for a lot of "what if" type of screenwriting — plus it's a fairly remote area which always lends a spooky quality to a place, as well as plenty of natural waterways or woods in which to hide bodies or other nefarious deeds. What I do know is that Season 3 promises to resurrect what Season 2 failed to do — excite fans of Season 1, and new viewers.

In it, Ali leads the cast as detective Wayne Hays, who spends half his life haunted by the case, while Stephen Dorff plays his partner, Roland West. The case in question is the 1980 disappearance of siblings 12-year-old Will and 10-year-old Julie Purcell.

The show takes place over three timelines, the first during the original investigation, the second is in 1990 when Wayne and Roland are subpoenaed after new developments in the cast come to light. In the third timeline, Wayne is an old man struggling with dementia in 2015, and he's being interviewed by a true crime documentarian. Unfortunately, with the dementia creeping on, Wayne struggles to remember accurately the events of 25 years previously. Something tells me that's about to bite him in the butt. Count me in.

Sounds intense but following the epicness of Season 1, and the lull of Season 2, I'm hoping lucky number 3 is where True Detective really ups its game. If nothing else, catching a glimpse of the Ozark mountains crest beneath the setting sun may be enough to convince me this is the best season yet.