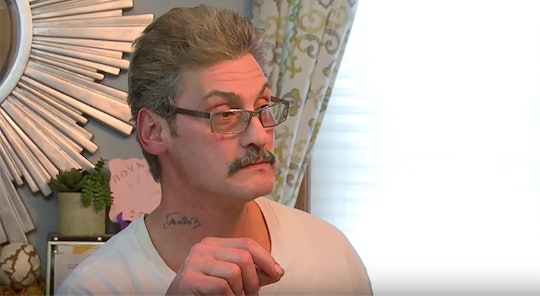 Each family on Teen Mom OG has a unique set of problems, something Tyler Baltierra knows all too well. Case in point: Viewers watched Tyler's dad struggle with his addiction and legal issues for years. As for where Tyler Baltierra's dad is now? It looks like the grandpa is on a better path.

When I was first introduced to Butch back in 2009 a la Teen Mom, he was rocking a mullet and an anger problem. At the time, he was upset with Tyler and Catelynn for placing their daughter, Carly, up for adoption following her birth in May 2009. And his rage intensified when he caught a glimpse of a tattoo Catelynn got to commemorate the event — Carly's footprint. "You got a tattoo of a kid you don't even have," he screamed during a particularly bad fight, according to MTV.

Not too long after the fight, Butch — who was married to Catelynn's mom, April, at that point — was hauled off to prison in September 2011 for alleged domestic abuse.

The arrest brought up other issues in Butch's life, like his longtime struggle with substance abuse. Viewers then followed Butch as he attempted to treat his addiction issues amid rehab and jail stints.

Butch's difficult journey culminated in Tyler footing the bill for a January 2018 rehab stay in an Austin, Texas-based facility. Butch successfully completed the program (woot, woot!) and he spoke out on his sobriety in November 2018.

Despite Butch's struggles, it looks like he's doing well these days. He currently lives in Austin, and all signs point to a new relationship. "I am a lucky man," Butch captioned an Instagram shot of himself with an unidentified woman.

Butch is also on good terms with Tyler, revealing to fans that they went skydiving in late January. "This is where you go after you jump out of an airplane twice with ur SON and his BFF," Butch captioned a video of the group eating BBQ.

Making matters even more sweet? Tyler took to Instagram to pen an emotional letter praising the accomplishments of his dad and his sister, Amber Baltierra. He said:

Writing this with tears in my eyes because words can’t express the amount of peace & joy I feel in my heart. After seeing these two at their lowest & now seeing them sober & steadily climbing, I just can’t say enough how proud I am of both of them! I am a firm believer that the power of unconditional love in a family can truly transform the dynamic & I’m just so happy to call these two my family...I love you both SO MUCH & I’m SO PROUD OF YOU!!!

On that note, here's to many more years of sobriety in Butch's future. Your family is rooting for you.