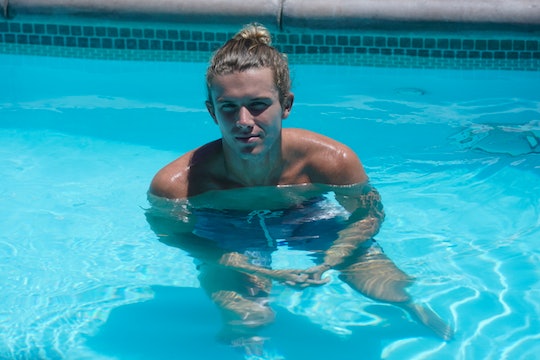 The first head-of-household was crowned and it was your favorite lifeguard, Tyler Crispin. With all the power this week Tyler had some tough decisions to make, putting him directly in the spotlight. It's no surprise then that viewers are curious about Tyler. For instance, many want to know where is Tyler on Big Brother from?

Thankfully, his cast bio is quite informative and it turns out his hometown is Rossford, Ohio and he currently lives in Hilton Head, South Carolina. You may recall from the premiere that Angela is also from Hilton Head, a fact that she quickly made known to all the other houseguests, something Tyler wasn't at all happy about, and rightly so. Tyler feared that because Angela was so vocal about the fact that they come from the same town the other houseguests might suspect that they knew each other outside the house and were working together, making them targets. Luckily for them that doesn't appear to be the case.

Instead, Tyler was able to go on and win the first HOH competition and he and Angela are now in the Level 6 alliance, along with Brett, Winston, Rachel, and Kaycee. Thus, the pair are actually sitting pretty and as of now only Angela has a target on her back and that's because of Swaggy C.

As the first HOH Tyler has certainly put himself in a position to become a target, but in order to avoid any damage to his game, he went the safe route with his nominations this week. Tyler put up Sam and Steve, the two players who were first eliminated in the HOH competition, demonstrating they weren't exactly a threat to anyone's game.

Still, although Tyler nominated Sam it doesn't seem like he actually wants her to go. During Sunday night's episode, he became frustrated because Sam got into a little fight with Kaitlyn. Tyler knows Sam needs all the votes she can get so she can stay in the house, and having a fight with Kaitlyn won't do Sam any favors. Even so, Tyler actually doesn't have anything to worry about.

Unbeknownst to him, Sam actually won the first power app of the season and she chose the "Bonus Life" app, which gives her the power to save herself or anyone else who's evicted in the first three evictions. If she doesn't use it, whoever's evicted during the fourth eviction automatically gets to return to the house. Thus, if Sam really is evicted this week she can use her power to come right back. Still, this will hopefully only be a last resort for Sam and she'll be able to either pull herself off the block during the Power of Veto competition or get enough votes to stay.

Although Tyler has obviously made friends in the house, he's also made some enemies. He's totally against Swaggy C and "his minions" as Tyler calls them. Additionally, because Bayleigh got mad at Tyler during the HOH competition and her alignment with Swaggy C, he isn't a big fans of hers either. Tyler has already made it clear that if one of his nominations is pulled off the block he'll be putting up Bayleigh in their place. Hopefully for Bayleigh, it doesn't come to that, but fans will just have to wait and see how this will all play out.

No matter who ends up on the block come eviction night, it'll be difficult for Tyler to get whoever he wants sent home out the door. Though Tyler has his own alliance, with him as HOH, they only have five votes and this week they'll need seven to send someone home. That said, anything's possible in Big Brother and perhaps they can get someone on the other side of the house to flip. Fans will just have to tune in to find out.