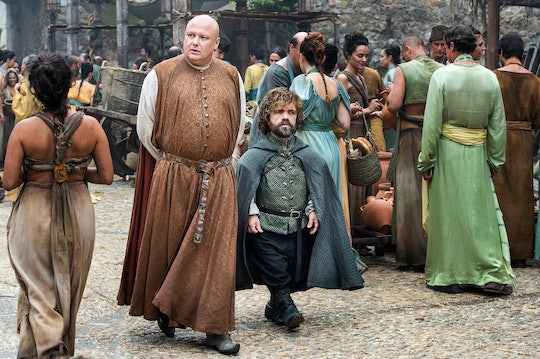 Where Is Varys Going On ‘Game Of Thrones’? He's Leaving Mereen

Varys and Tyrion finally took their leave of each other on tonight's Game of Thrones, "No One." It's something of a surprise since they've been doing so well together – it's been nothing but quips and court intrigue – but Varys is indeed leaving Meereen to Tyrion. But where is Varys going on Game of Thrones?

Ever since Varys and Tyrion met up overseas, they've basically been best pals, especially since they had both escaped the craziness of King's Landing and landed in the entourage of the Mother of Dragons. They had similar viewpoints, similar senses of humor – a lot to bond over! In Daernerys' absence they took over ruling in Meereen, but now Varys' is leaving the city in Tyrion's (and Dany's) hands. He didn't say exactly where he was going, but he did mention that Tyrion would need friends in Westeros (or words to that effect), so that could mean that Varys' is headed back over the sea to see what's up with the kingdom he left behind.

But it's possible Varys is headed elsewhere, or even that he might take a detour on his way to his eventual destination. Varys is a man of mystery who always has several different schemes running at once. Who knows where he'll ultimately end up?

If Varys is looking to continue helping Dany's cause, then perhaps he could return to Westeros to pave the way for her eventual attempt to take over the Iron Throne. Westeros is clearly in shambles, with King's Landing in particular trouble right about now, and if Varys appeared to sow the seeds for Dany's rule, it could really take root. The people of Westeros might be ready to look towards a leader who will come to save them from the current state of their lives – especially a leader who has several dragons in tow. Dany's definitely got PR on her side, and having supporters in place before she showed up would be an immense help.

Of course, there are always other possibilities. When Varys met with Kinvara, the other Red Priestess, he was very shaken by the information she had about his past. This couldn't be for naught; perhaps the show is planning on delving deeper into Varys' life before he came to Westeros, and his journey now will have something to do with that.

While Varys' destination might not be clear at the moment, one thing is certain: Tyrion will definitely miss his favorite bantering buddy.