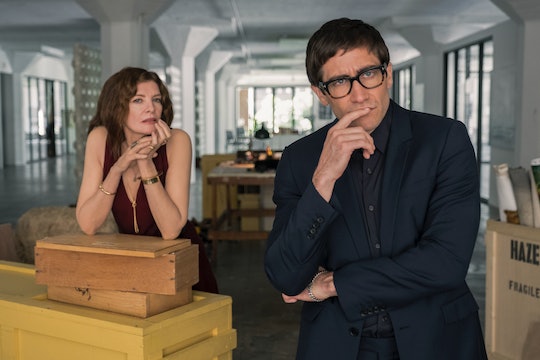 Netflix's latest original, Velvet Buzzsaw, is a horror film that follows art critic, Morf Vandewalt (Jake Gyllenhaal), and his frightening encounters with murderous paintings that come to life. The story is centered around a metropolitan art scene and the people within it. The locations and sets in the film look stylish and modern, so viewers are wondering, exactly where is Velvet Buzzsaw set?

According to Netflix, Velvet Buzzsaw is set in the “contemporary art world scene of Los Angeles, where artists and mega-collectors pay a high price when art collides with commerce.” The movie comes from writer and director, Dan Gilroy, who highlighted L.A.’s seedy underground scene in his 2014 thriller Nightcrawler. In Velvet Buzzsaw, Gilroy focuses on the city’s popular art galleries, where corrupt dealers and critics end up getting more than they bargained for. In a trailer for the film, you can see aerial shots of L.A., as well as scenes featuring the some of city’s modern art galleries and luxurious suburban homes.

The film tells the story of Morf, a well-respected a L.A. art critic who has the power to make or break an artist’s career. He is surrounded by a variety of pretentious art scene types, including the self-involved art agent Rhodora Haze (Rene Russo) and her smarmy competitor Jon Dondon (Tom Sturridge). But when the masterpieces he’s dealing with start coming alive to murder people, Morf finds himself in a terrifying situation.

In an interview with The Hollywood Reporter, Gilroy talked about what inspired him to write Velvet Buzzsaw. “I’ve always wanted to do a satirical thriller, and I couldn’t find the vehicle for it," said Gilroy. “Then, I was in a contemporary art museum one night near closing, and it was very creepy. I thought, ‘Wow, this is really good world to set a thriller.’ Thematically, I was very interested in the idea of the relationship between art and commerce in today’s world. It’s a very uneasy relationship.”

Gilroy explained that through Velvet Buzzsaw and its characters, he was able to critique the world's superficial judgment of art. “I feel strongly that the quality of the work shouldn’t be judged by the volume of social media engagement, the number of views or amount paid,” he told THR. “I wanted to get at the idea that art is more than a commodity, and I think those two things intersected with the vehicle that I had for it. Then, Jake’s character came to the fore. It’s a world with large characters, and when you research it, certain things just start to leap out at you. An art critic became one of them.”

But the characters and nuanced cultural critiques aren’t the only things leaping out at you in Velvet Buzzsaw. The movie is a horror film after all, and when you see those sinister paintings slowly seep out of their frames, ready to kill unsuspecting victims in their fancy L.A. homes, the result is more than terrifying.