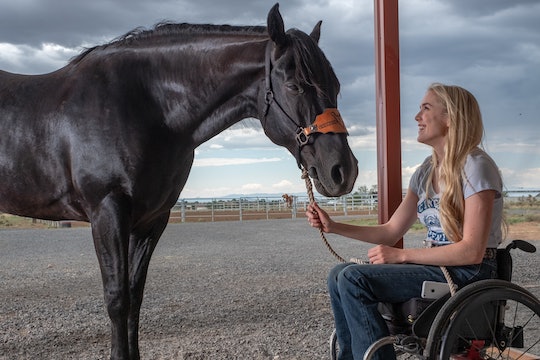 Netflix's new film, Walk. Ride. Rodeo., tells the inspirational true story of a young woman whose pro-rodeo career is brought to a halt when she's faced with a devastating accident. The story is told along a backdrop of majestic horses and sprawling scenic farmland, which has some viewers wondering where Walk. Ride. Rodeo. is set and where it was filmed.

Walk. Ride. Rodeo. is based on the true story of Amberley Snyder, a barrel racer and motivational speaker who defied the odds after she pursued her dreams of becoming a competitive horse-rider, despite losing the ability to use her legs in a tragic accident. Because Snyder’s story began in Utah, that is exactly where the film is set. In one of the opening scenes, a chyron on the screen reads “Snyder Family Ranch, Elkridge, Utah,” referencing Snyder’s farm and hometown.

But, believe it or not, the landscapes seen in the film aren’t actually from Utah. Most of the movie was shot in various locations throughout New Mexico, reported The Location Guide, including major cities like Santa Fe, Espanola and Albuquerque. According to the report, the film featured a huge number crew members, actors and background talent from the state the state as well.

Walk. Ride. Rodeo. starts with Amberley— played by actress Spencer Locke — competing in a national rodeo competition. Within the next few scenes, she suffers a crippling accident after which doctors tell her she will be confined to a wheelchair for the rest of her life. But Amberly doesn’t let this hold her back from pursuing her dreams. Just four months later, she defies all odds and gets back in the saddle, and restarts her career in the most inspirational way.

Snyder was involved in many aspects of the film, including training Locke for the role. In an interview with Brief Take, Locke revealed that she flew to Utah to meet Snyder and was able to train with her while she was there. “When I got the role, Conor Allyn, the director, and I flew to Utah to spend a few days with her (Snyder) and get to ride and really get to know each other the best we could,” Locke told the outlet. “I had a bit of a rodeo boot camp in Utah with Amberley and then the horse trainers—man, I was with them every weekend when we were shooting, and I just fell in love with riding. I did get really good by the end of the shoot.”

Locke also said that along with the gorgeous horses and riding scenes in the film, she hopes viewers take away a message of strength and hope and use Snyder’s story as inspiration. “You don’t have the glory without the struggle and I think that the film beautifully portrays both — both the trauma went through by Amberley and having to rise above it,” noted Locke. “Which is the point of the film—to inspire people to take a look at — that and to choose to overcome whatever is thrown at you, that’s the beauty of it. That’s kind of the message of the movie too, of not giving up of what you know is in your heart that you want to do, and when it’s ugly, even when you doubt yourself, to really stay true to yourself and keep going.”

Walk. Ride. Rodeo. is currently available to stream on Netflix.