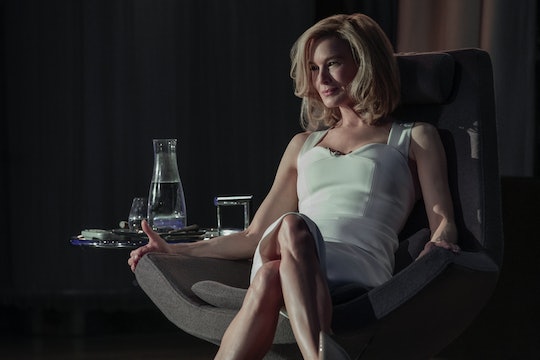 Netflix’s new drama, What/If, is all about how far people will go to get what they want. The story is centered around a corporate billionaire, Anne Montgomery (Renee Zellweger) and a young newlywed couple who agrees to a lucrative, yet morally questionable deal with her. The show is based in a modern, bustling city with a dark and seductive aesthetic, which has some viewers wondering: exactly where is What/If set?

With its foggy skies, narrow streets, and tumultuous weather, San Francisco serves as the perfect backdrop for What/If’s thrilling storyline. In the trailer for the series, you can see the city’s most famous landmark, the Golden Gate Bridge, hanging amidst a dark sky brimming with ominous lightning and thunder. Zellweger's character is then seen standing on a balcony overlooking the waters of San Francisco bay, possibly mulling over her next dangerous power play.

What/If tells the story of Anne and her relationship with a young San Francisco couple, Lisa (Jane Levy) and Sean (Blake Jenner). When Lisa, who has been unsuccessful at starting her own health company, meets Anne, the two strike a dangerous deal. Anne agrees to give Lisa $80 million for her startup as long as she agrees to give her one night with Sean. But there’s one big catch, Sean and Lisa can never talk about what happened on that night, and when Lisa goes through with the deal, that secret begins tearing their relationship apart.

It may seem like a sordid premise, but in an interview with Forbes, showrunner Mike Kelley explained that he wanted the show to explore the weight of personal decisions and how they shape a person’s destiny. “In the first scene, Renée’s character Anne Montgomery says everything happens for a reason,” he said. “I think about that a lot. The context for that is generally that the things that happen to us are out of our control and that fate plays a larger role than our personal responsibility and decision-making. I like to fight against that because I believe it’s certainly equal measure, but for the most part, we’re the captains of our own destiny.”

He noted that the current moral climate and his love for films like Indecent Proposal and Fatal Attraction inspired him to write this story. "We're currently living in a moment where morality has become very murky and subjective,” Kelley told the outlet. “It’s been very unclear where the line is for getting what you want. And, so that’s where this idea began — While this isn’t a sliding-doors-style show, it is about making a morally consequential choice and watching what happens. We’re the masters of our own destiny in a lot of ways and I wanted to shine a light on our responsibility for the choices we make that lead us to the places we now find ourselves.”

Morality and choice are at the heart of this psychological thriller, so San Francisco's scenic landscapes and contrasting cut-throat Silicon Valley culture seem to serve as the perfect metaphor.

What/If premieres on Thursday, May 23 on Netflix