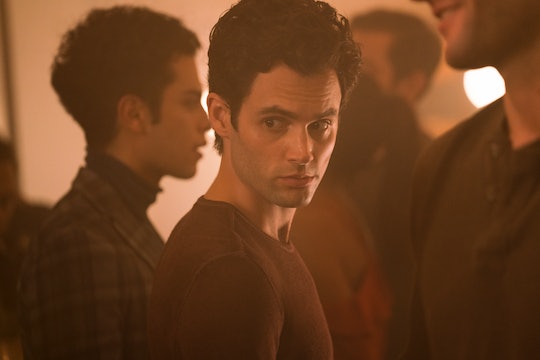 Season 2 Of 'You' Will Take Joe Out West

Lifetime’s not-so-romantic thriller, You, recently moved to Netflix, and viewers have spent the last few weeks devouring the entire first season. The show is centered around a charming New York City bookstore owner named Joe, who stalks (and kills) his way in and out of relationships. Next season, Joe will leave New York to escape his past, but fans are curious to know where he's going. So, exactly where is You Season 2 set?

Netflix’s You is loosely based on a series of books by author Caroline Kepnes. In the sequel to You — titled Hidden Bodies — Joe heads to Los Angeles in hopes of escaping the loose ends he left in New York. Season 2 of You will also take Joe to Los Angeles, reported Deadline, and will feature The Haunting of Hill House actress Victoria Pedretti as the female lead.

In an interview with TV Line, showrunner Sera Gamble explained that New York was instrumental in telling Joe’s not-love-story in Season 1, because it added to the charm of being young, broke, and in love in the city. But she noted that Los Angeles will be a completely new pace for Joe, and it will affect how his story plays out next season.

"Los Angeles is a completely different vibe,” Gamble told TV Line. “I’ve lived here since I was 16, and one of the classic truisms about living in LA is that you’re surrounded by former New Yorkers who f–ing hate it here. So we started the writers’ room for Season 2 by being like, ‘Joe moves to LA and he completely hates it. Let’s talk about how much fun that is.'”

The series doesn’t follow the books completely, and when talking to Metro UK, Gamble said that writers are adding some big changes to the coming story. “We are prepping to shoot season two now, in Los Angeles, which is also where the second book of the series takes place,” she told the outlet. “We’ve got lots of great stuff from the books, and also some new things that have come about as a result of changing the story for TV, like that Candace is alive and kicking and not pleased with Joe.”

Most of the Season 2 will center around Joe and his past coming back to haunt him, Gamble told The Hollywood Reporter, and that past could include Dr. Nicky (John Stamos) and the Salinger family's hired investigator. “Part of the fun of continuing the story is that the loose ends from Joe's past are still dangling and could come back to him at anytime,” said Gamble. “He is very worried about the fact that Peach Salinger's family has hired people to investigate her alleged suicide, and there is evidence potentially still at her house from season one. If you look at every act of violence that he does in season one, that is potentially something that could come back and bite him."

In New York, Joe was in a familiar environment and comfortable with his surroundings, making it easier for him to get away with murder. But now that he’s moving to LA, a brand new place with a completely different culture, it will be interesting to see how he plots his course.

Season 1 of You is currently streaming on Netflix.