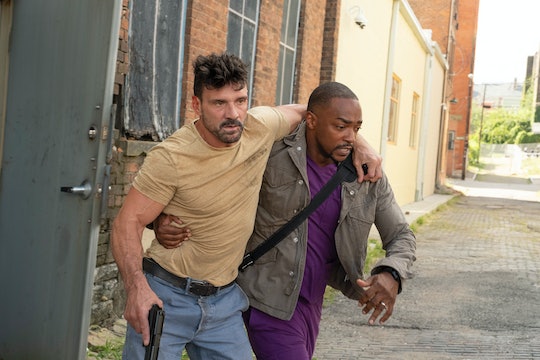 If You've Never Been To The Buckeye State, Netflix Has A Reason To Get There

Recently, it feels like the best place to go for the latest movies is your couch — thanks to Netflix. And one of the Network's latest movies has a raw, on-location feel that might remind you of Anytown USA. So where is Point Blank set? If you're a Midwesterner, you might have been in the neighborhood where this one was shot.

Seeing as I'm a fellow Ohioan, I was excited to learn that the Anthony Mackie film was shot in a suburban Cincinnati neighborhood, not far from the original Skyline Chili's commercial shoot (I understand that Ohioans may be the only people to get that reference). The movie is set in a Victorian style North Avondale home, according to Queen City native Johanna Byer, the film's producer and vice president of US Films for Gaumont. It was built in the early 1900s and has a ton of square footage. Plus, the surrounding homes and neighborhood add to that iconic gangster-style feel producers were going for.

A seven-week filming schedule was arranged with the homeowners, Chris and Allison Harten. Chris told local news outlet, Channel 9 WCPO, a scout contacted the couple after they posted a "for rent" sign on another property they own. Unfortunately, that house wasn't the right fit, but the home next to the Harten's house was and they owned that one, too. The rest, as they say, is history.

In case you haven't heard about this one, Point Blank follows ER nurse, Paul (Mackie), whose pregnant wife is kidnapped after he's attacked in their home. Paul has to team up with an injured a murder suspect and career criminal (Frank Grillo) if he's to stay a live and save his lady from gangs and corrupt cops. Relatable, am I right? This version is actually a remake of the 2010 French thriller. Rotten Tomatoes gave the original a 91 percent rating, and with Marvel hero Mackie playing the U.S. lead (and Grillo who's also part of the Marvel Universe), there's no reason the Netflix Point Blank can't move the needle a little higher. Also aligned with the original is the fact that pair have to go against rival gangs and corrupt cops to save Paul's wife and survive. It sounds like this unlikely pair will be the Marvel head canon you never knew you needed until this very moment. Thanks, Netflix.

The trailer looks about as gritty as a film like Point Blank should — with lots of action, swearing, and bro tension (aka the best kind of on-screen chemistry). When you throw in political corruption, a kidnapping, and high stakes, you're looking at a pretty solid Friday night.

Whether you've already seen the original French version of Point Blank, or have the remake's air date already scribbled in your planner, there are enough reasons to check this one out. Coming from a massive Marvel (and 8 Mile) fan, you can count me in with the mere mention of Mackie. Add in all the action and suspense in a city near me and, well, enough said.