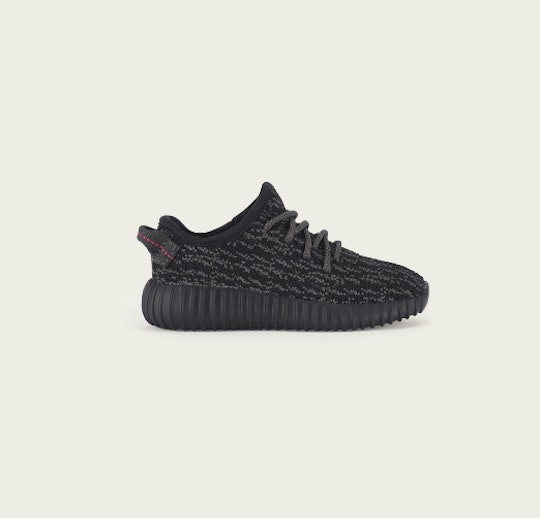 Shoes for tiny people are always a compromise — they grow out of them so fast that it's hard to justify spending so much dough on them. But little mini name brand sneakers are hard to resist. Which is why no one is judging you for wanting to know where to buy baby Yeezy Boosts, which are retailing for $130. The Kanye West designed sneaker debuts on Saturday and they aren't available online through Adidas' website yet, though that might change. If you really want a pair, you're going to have to haul to an Adidas store or approved retailers in major cities. Or wait till people start re-selling them online and pay, probably, a little more.

Adult Yeezy 750 Boosts retailed for $350, but resell for over $1,000 on Amazon, so be ready for a shopping frenzy. Because unless you are Kim Kardashian West (or her friend, since she sent samples to all her mom-friends) who else can drop a few hundred dollars on baby sneakers?

There is something very cool about Yeezy's in general and the infant versions are pretty adorable — exact replicas, with the same moccasin construction and everything as the grown up version. They also only come in two colors, turtle dove or pirate black, so don't fall for any fake kicks on eBay that promise a purple or blue baby Yeezy Boost.

And that might be the solution if you like the look but can't bring yourself (or even get your hands on, which is more likely) to drop the dough on designer sneakers for your little person. There are many knock off baby Yeezy Boosts that look so much like the real thing that they would fool anyone who doesn't know what they're talking about. It's also not likely that an 18-month-old knows if they got the real deal or not.

But that's kind of like buying fake Adidas sneakers with two stripes instead of three on the side — the whole point of brand name stuff is the brand. It's about showing off and no one wants to look like a pretender. In a press release, Kanye said, "These past two years, adidas and YEEZY have given a glimpse into our future. This partnership illustrates that anyone with a dream can dream without limitations."

Which basically means, in Kanye-speak, that you shouldn't settle for knock-off Yeezys.

Already, many people on social media are selling certain sizes of the sneakers they somehow managed to get their hands on. The sneaker world is a mysterious one and to get the freshest new thing, you usually have to get aggressive. If you have a baby Yeezy dream (and a solid credit card limit), you will find a pair.