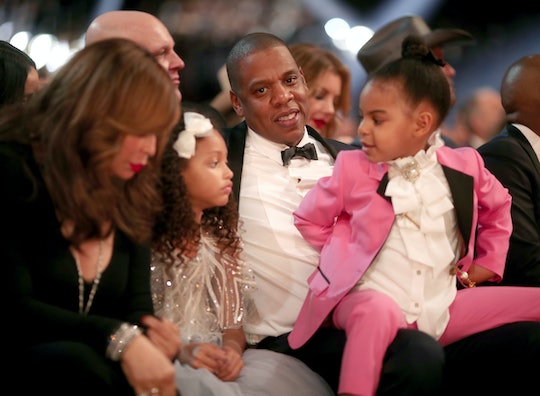 How To Get Blue Ivy's ***Flawless Grammys Outfit

Beyoncé made heads turn on the 2016 MTV VMAs red carpet when she showed up looking like a literal angel from the sky and walked arm-in-arm with her daughter, Blue Ivy. And this year, the twosome to make all other twosomes endless inadequate made magic happen at the Grammys all over again. So, where can you buy Blue Ivy's Grammys outfit? Though they didn't walk the carpet this year, we got a glimpse of Blue inside the venue — and it was every ounce worth the wait.

Six months ago, Beyoncé walked the VMA red carpet alongside Blue and the mothers of Eric Garner, Trayvon Martin, Oscar Grant, and Mike Brown — so many of whom appeared in her incredible visual album, Lemonade — and without saying a word, the message was clear. Even though the moment was unforgettable for so many reasons, it marked the first time Bey hit the carpet with Blue. Any time Beyoncé offers us a glimpse into her private world it's hard not to pull threads from whatever we get, trying to make sense of what she's trying to tell us, or what point she's trying to prove, or what message she's trying to (either subtly or outright) send.

This year, this image of Jay kissing his baby girl should speak for itself:

Though there was an image circulating earlier this evening of Blue wearing a Belle-inspired gold sparkly gown, Beyoncé opted out of walking the red carpet this year, which meant it was anyone's guess what Blue was wearing. Her outfit, of course, is sheer perfection — and a touching nod to all of the artists who've obviously influenced her parents and her extended family throughout their entire careers. The look screams Prince, and it makes sense, considering Queen Bey made it a point to perform "Purple Rain" at every single tour stop of her Lemonade tour throughout the summer.

Blue Ivy's outfit was a Gucci creation and though it was likely made either specifically for Blue or with Blue in mind, it's not exactly for sale for the modern laypeople like you and I. Even more disappointing is that one-piece outfits and suits for little girls aren't exactly the norm, since stereotypical kids' fashion dictates that suits are for boys and frilly dresses with tulle are exclusively for girls. That said, it doesn't mean parents can't get creative with the outfits they create for their kids by ignoring what "section" they're in and just shopping for the clothes that make their kids feel good and most importantly, feel seen.