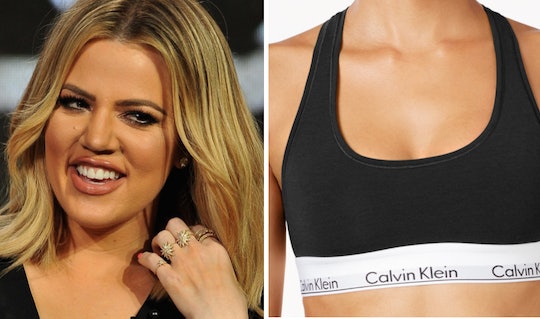 In the Instagram post, Kardashian expressed her gratitude to God for gifting her with pregnancy, Thompson, and her fans for allowing her to have her time to enjoy her news in private. It could not be any sweeter of a message. Kardashian wrote, in the caption:

Thank you all for understanding. I am so thankful, excited, nervous, eager, overjoyed, and scared all in one! But it's the best bundle of feelings I've ever felt in my life!

In addition to the message, fans were understandably attracted to what Kardashian was wearing, too. The black Calvin Klein sports bra that Kardashian is wearing is a simple, understated top that perfectly showcases her bump. Taking a turn from her normally glamorous looks, the bra is something that the every day person would definitely have in their closet. But if you don't have that specific bra in your own closet, you can easily pick it up at any major department store online or even on Calvin Klein's website.

Kardashian's black Calvin Klein Modern Cotton Bralette comes in sizes Small through Extra Large, stretching to your expanding pregnancy bust size (or standard size) and is currently on sale at Macy's for a few dollars off for $21 (because everyone loves a good deal). If you're looking to add more color into your wardrobe, the sports bra comes in different colors at each store where it's sold — like white, pink, and black and white tie-dye.

Because the bra is made out of cotton, it stretches to your shape easily and is made out of a soft cotton fabric that won't irritate your skin. If you're looking for Calvin Klein maternity wear, however, you can't find it at department stores but still find some maternity pieces from resale websites like thredUP.

Wearing Calvin Klein runs in the family. Kardashian's younger sister, Kendall Jenner appeared in the same designer's 2015 underwear campaign, according to People and has shared photos of herself wearing the iconic underwear to her own Instagram (without making as exciting of an announcement as Kardashian did on Wednesday).

But Kardashian is not the first pregnant celebrity to pose in her Calvins and share it to her Instagram. This past March, while pregnant with her second child, singer Ciara shared a gorgeous photo of her bump while dressed in her own black Calvin Klein bralette (identical to Kardashian's), according to Us Weekly.

Kardashian knows a thing or two about fashion — she has her own fashion and denim line, Good American, which is sold at Nordstrom department stores. While you might expect Kardashian to have used her announcement to promote her own brand, you really can't blame Kardashian for wanting to be as comfortable as possible, especially since she could be due as early as February, according to Us Weekly.

Kardashian's bump speaks for itself, especially since Kardashian had been keeping it under wraps for weeks. Her Calvin Klein bralette showcases her bump off perfectly while still allowing her to maintain her comfort. And who doesn't love being comfortable?