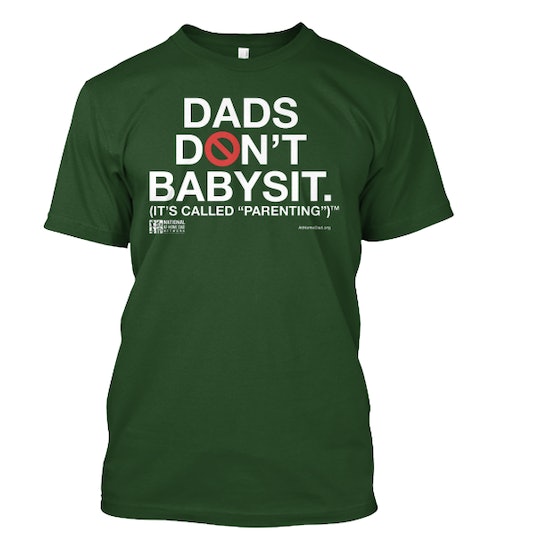 Where To Buy The "Dads Don't Babysit" T-Shirt, Because Parenting Is For All Genders

The world shouldn't need a reminder, but thanks to ingrained gender stereotypes, sometimes it can use a little push. As one helpful t-shirt puts it, "Dads don't babysit. (Its called 'parenting.')" The t-shirt first went viral after one British father, Al Ferguson, posted a picture of himself wearing it to Facebook. The father of three is a stay-at-home dad who wants to change parental stereotypes. For those of us who don't need convincing, though, and want to jump on board straightaway, here's where to buy the "Dads Don't Babysit" t-shirt. And yes, there are shirts for women, kids, and even babies. (Even better, proceeds go towards a good cause!)

On the Teepsring website, it seems like the t-shirts are only available for a limited time, but the National At-Home Dad Network says they will continue to produce the shirts as long as there is interest, with each "limited availability countdown" for the shirts renewing automatically. That said, if you're interested in wearing one of these tees as a subtle societal reminder right away, you can order through the Teespring website.

"It's all about parental equality really," Ferguson, who founded The Dad Network, told ABC. "I'm a really big advocate for moms and they're wonderful but I think dads get a raw deal. I just want us all to be perceived the same." You'd think that in 2016, that wouldn't be a problem, but biases — subtle and overt — can play against fathers (reason No. 4,001 that we need feminism).

Only 13 percent of employers offer paid paternity leave, according to Forbes, and men's rates of actually taking that time off is low compared to women's. When it comes down to it, there's unspoken pressure for men to provide, rather than nurture — and it's a bias that is seen even more when men are stay-at-home fathers. In 2014, the bias was alive and well: 51 percent of respondents in a Pew survey saying children are better off when they have a mother at home (only 8 percent of respondents said the same about fathers).

Not everyone has Donald Trump's view of fatherhood, luckily. The Republican frontrunner said in 2005, "There’s a lot of women out there that demand that the husband act like the wife and you know there’s a lot of husbands that listen to that... So you know, they go for it." However, there are many less obvious biases out there, so grab a shirt and help remind people that parenting isn't tied to a certain gender, and that fathers aren't around just to fill in when mom is busy.

More Like This
New Study Finds Moms Who Earn More Than Their Husbands Also Do More Housework
10 Of Drew Barrymore’s Best Quotes On Motherhood
When Christina Aguilera’s Kids Give Her A Bouncy House On Mother’s Day, She Jumps Right In
Mindy Kaling’s Daughter Is A Total “Narc” With Her Little Brother