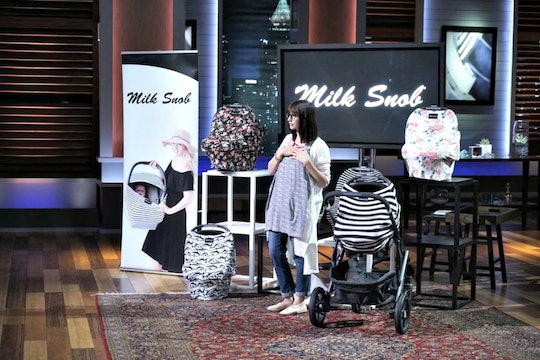 Moms Will Love The Milk Snob Cover On 'Shark Tank'

The entrepreneurs on Shark Tank are full of good ideas, but the multi-functional infant seat cover creation is an absolutely genius product. In fact, once you check it out, you're probably going to want to know where to buy the Milk Snob from Shark Tank. The Milk Snob comes in all different kinds of cute patterns and colors and functions as a car seat or stroller cover as well as a nursing cover. Not only is it cute, it's also a woman-created business. Because seriously, only a mom with style understands how on point a cover like this really is. They're made of a lightweight Rayon and will fit over any car seat or stroller, and also works as a cover for a high chair, a grocery cart, in addition to being a nursing cover.

The company was created by the German-born Melanie Disbrow after she moved to the United States in 2006 and couldn't find any covers that she wanted to stroll around with (or that fit just so), so she decided to make her own. The mother of three sells them directly from her website for $35 a piece, and if you aren't picky about the pattern and just like the whole idea of them, there's also an option on the site to buy a "factory second" for $15, so it might be missing a stitch or two, but it's the same material and meets the same safety standards.

You can also buy them on Amazon or on Walmart websites for the same price, so it's probably better to just get it straight from source. If you follow them on Instagram or sign up for a newsletter, they also often dole out coupon codes. For all of its purposes, and for how easy Rayon knit is to take care of, it's a pretty good deal.

The feedback on their social accounts is all positive. There's usually at least one or two bad reviews when it comes to the internet and anything parenting related, but seriously, moms (and even dads) are obsessed with the covers. Even the "factory second" ones. One mom wrote, "I ordered 2 covers. Since they were grab bags I was scared to death that they would not be gender neutral, so in the notes I wrote that I didn't know what gender my baby is."

She added, "I got the exact 2 that I actually wanted! I could not be more elated! I can NOT see any defects in either cover." (So if you're not picky about stripes versus peonies, the grab-bag might be the way to go, friends.)

Now that Disbrow has funding from the Sharks (Lori Greiner bought 10 percent of the company), the covers will definitely be all over the playgrounds very soon. We won't judge you for stocking up.