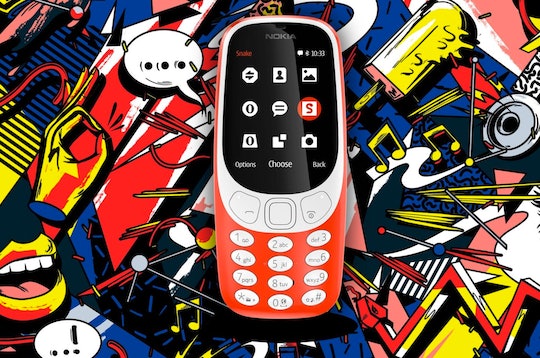 Throwback Thursday came a little early this week, when Nokia unveiled an updated version of the Nokia 3310 cellphone at an industry conference in Barcelona Sunday — nearly 17 years after it first debuted, and 12 since it was officially retired in 2005. But lovers of the original model's "legendary" game, Snake, and smartphone users craving the absurdly long battery life of the "dumb phone" era are definitely going to want to know where to buy the Nokia 3310 when it's available. According to CNN, nostalgic techies will be able to scoop up the 2017 version of the classic phone sometime during the second quarter of the year.

And for those seeking a streamlined, uncluttered cellphone experience at a reasonable price (a little more than $50, according to NPR) the Nokia 3310 could, again, become the go-to. It boasts a camera, color screen, and mp3 capabilities — none of which are groundbreaking features for jaded smartphone users, of course, but they are upgrades from the original. Besides, the real draw of the device, which Nokia is called an "iconic silhouette of the original" reimagined for 2017, is the the advertised "awesome" 22 hours of talk time before the battery dies. And if you're in the United Kingdom, you can preorder the phone at a place called Carphone Warehouse.

But if you're in the United States? There's actually a chance that you may be out of luck on this front. According to The Independent, the phone will communicate using antiquated frequencies that have been shut off in some countries, most notably the United States and Canada. So, there hasn't been an official indication that the Nokia 3310 will be sold in the United States; it may simply market the phone as a great travel accessory and focus on the markets where the frequencies still exist, like Africa, Europe, the Middle East, and Asia. Nokia has not responded to Romper's inquiry about whether the phone will be available to American consumers and whether it is investigating any workarounds to make that possible.

If it turns out that chatting and texting up a storm within U.S. borders won't be an option, perhaps disappointed early aughts diehards can console themselves with the reported pitfalls of the device. Gizmodo's Carlos Zahumenszky, for example, was unimpressed with its "awful quality camera," wrote that he simply would not recommend using its keyboard, dismissed its directional pad as "just as awful as you'd think it would be," and called the browser, which runs on outdated 2.5G mobile networks, "REALLY slow."

He conceded that it would be a good option for grandparents who don't want anything to do with social media and travelers looking for a lightweight device with long battery life, though.

Until you try it for yourself, it's tough to know whether a technological time warp would prove a boon or a bust.