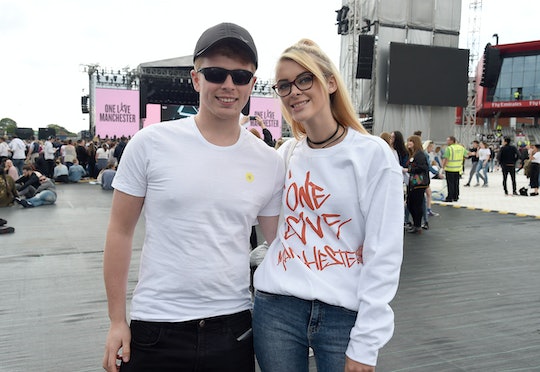 Where To Buy The One Love Manchester Sweatshirt

At the One Love Manchester concert on Sunday, Ariana Grande switched up her usual costumes and rocked a sweatshirt honoring the victims and their families, instead. And for those looking to emulate the singer's casual style and help victims at the same time, they were in luck. If you want to join Grande and support the victims of the Manchester attack and their families as well, here's where to buy the One Love Manchester sweatshirt and contribute to a great cause.

The sweater Grande is wearing — as well as many other One Love Manchester products — are available on the benefit concert's website. While website visitors are given the option to donate on Facebook or directly to the British Red Cross, they can also download a charity single or access the One Love Manchester shop for T-shirts, sweaters, hats, and pins.

According to the website, net proceeds of all shop sales will go directly to the British Red Cross Society's "We Love Manchester" emergency fund and support those affected by the attack last month.

Some questioned whether Grande's show would go on after the attacks in London on Saturday night, but Grande's manager, Scooter Braun, said the attack proved there was even more reason to carry on and honor the victims of both attacks. "All artists involved have been unwavering in their support this morning and are determined to carry on with the show," he said on Twitter, according to CNN. "We ask the strong city of Manchester and the world to join us in making the statement that hatred and fear will never win."

To make a statement of your own, pick up one of One Love Manchester pieces. There are seven different T-shirts to choose from, two styles of crew neck sweaters, and two different hoodies. Shoppers can also pick up a branded baseball cap or a ribbon enamel pin (which is a ribbon adorned with Grande's signature bunny ears).

The products come in a range of prices, so no matter what your budget is, you can support the cause. The pin goes for $5, the T-shirts and cap all cost $20, and the sweatshirts and hoodies cost $40. All products are expected to ship within two to three weeks, according to the website.