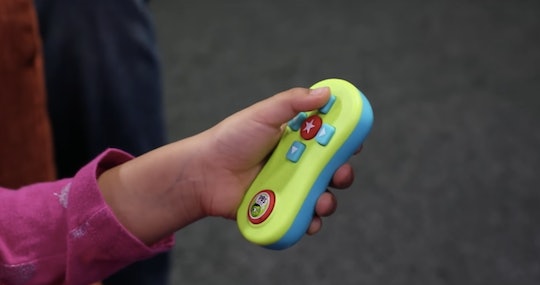 This PBS Kids Streaming Stick Is Perfect For Summer

As most parents can attest, the merits of technology for kids really can't be overstated. True, there is such a thing as too much screen time, but allowing your children to enjoy television shows, games, music, and movies isn't necessarily a bad thing. Letting your kid sit right in front of the TV watching Peppa Pig while you're in the kitchen cooking dinner can often be a total lifesaver. And now, PBS has created a new, easier way to make that happen. So, where can you buy the PBS Kids streaming stick? It'll be on sale soon, and you won't want to miss out.

While streaming devices make it easy for your kids to virtually access the world right from home, they aren't without their potential dangers. So, PBS thought of an alternative option. Think of it as a kid-friendly Roku, in a sense. The PBS Kids Plug & Play, as it's officially known, will reportedly hit shelves on May 24, but it will only be available at Walmart, for $50, for the duration of the summer. When September rolls around, though, the device will become available at other retailers, although you might want to go ahead and grab it at Walmart before summer officially hits and you find yourself praying for something fun for your kids to do in the nice, cool, air conditioning.

While other streaming devices like the Roku and Apple TV may offer a more comprehensive list of streaming possibilities, the PBS Kids option stands out with its kid-friendly design, ability to watch without Wi-Fi, and large storage capability.

As Engadget reports, the adorable, race car-shaped Plug & Play features "1GB of memory, 16GB flash storage as well as a microSD card slot." With this abundance of storage options, the Plug & Play makes it possible to watch over 100 hours of PBS Kids content in its flash storage, without Wi-Fi.

According to Engadget, along with the sleek design, internet-free possibilities, and lack of any possible inappropriate content, the Plug & Play also features games and other content not available on typical streaming devices, such as,

50 sing-a-long songs, on-demand episodes of your kids' favorite shows, Words of the Week, an interactive sound box where you can play around with different instruments and a "Rail Riders" game -- where you're collecting different items on a railroad track. There's also a "Road Trip Adventure" board game, in which you move across a predetermined route by spinning a wheel, performing silly tasks and actions along the way (examples include buzzing like a bee or waddling like a duck). Last but not least is a series of interactive "scenes," where you can press the center star button to do things like launch fireworks or boost submarines.

So, while you may already have a Roku, or Chomecast, the PBS Kids Plug & Play is affordable, safe, and easy to use. And it may just be the perfect excuse to get you and your kids out of the burning sun, if just for a little while.