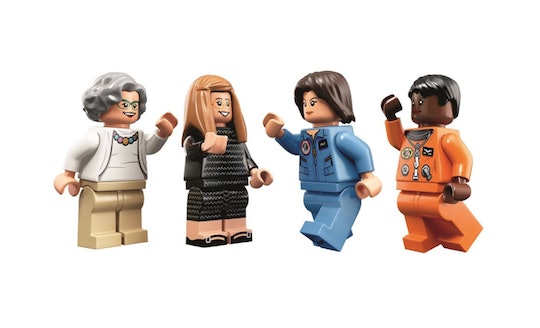 The Women Of NASA LEGO Set *Finally* Has A Release Date

Get ready for your holiday gift list to blast off into a whole new territory of awesome: The LEGO Women of NASA set is finally here. Here's where to buy the Women of NASA LEGO set because it will definitely sell out because — not sure if I mentioned it — it's awesome? Seriously, this just might be the coolest LEGO contribution since the building brick company's massive 7,541-piece Star Wars Millennium Falcon set.

Back in March, LEGO announced that it had selected its latest fan-created set: The Women of NASA. Designed and created by Maia Weinstock, deputy editor of MIT News in Cambridge, Massachusetts, the Women of NASA LEGO set features four women who have been pioneers in the fields of space exploration and astrophysics. Basically, LEGO was able to create a set celebrating four of the most out-of-this-world women in space.

As for where to get it, LEGO's announcement only mentioned that the Women of NASA LEGO set will "officially be landing on store shelves," but didn't specify which stores exactly. Representatives for LEGO didn't immediately return Romper's request for clarification on which stores LEGO fans can buy the set. However, a quick search for LEGO's most recent fan-submitted and LEGO-approved set, the Old Fishing Store LEGO set, shows it's widely available, both online and in brick and mortar stores, which is a good indicator that the Women of NASA LEGO set will be equally as available.

Solid bets for where to get your Women of NASA LEGO set include LEGO's online store, as well as brick and mortar retail LEGO Stores. But other major retailers including Toys "R" Us, Target, and Walmart; Barnes & Noble even appears to carry these highly sought after special LEGO sets. And yes, for those Amazon Prime lovers, you should be able to get the Women of NASA LEGO set on Amazon. However, if you're headed to each of these retailers' online stores to try and preorder the set, you may be disappointed to come up empty. Patience, young LEGO builder. It's still two weeks out from the release, and it seems as though the NYC Women of NASA LEGO event is the only way to get your hands on the set any sooner than the official Nov. 1 release date.

The Women of NASA LEGO set features four female minifigs: Nancy Grace Roman, Margaret Hamilton, Sally Ride, and Mae Jemison. Nancy Grace Roman is an astronomer dubbed the "Mother of Hubble" and served as one of NASA's first female executives. An MIT computer scientist, Margaret Hamilton developed the onboard flight software that helped send humans to the moon. Sally Ride became the first American woman in space in 1983. Mae Jemison became the first African-American woman in space in 1992. All four of the women space pioneers featured in the new LEGO set are still living, which means they'll get to interact and play with with their very own LEGO dopplegangers. How cool is that?

The Women of NASA LEGO set also includes a mini space shuttle model, the Hubble telescope, and display stands for each. The set features 231 pieces, is recommended for ages 10 and older, and will only cost $24.99. It's definitely an awesome price for such an innovative and much-welcome set.

While the original design submitted to LEGO included one more woman — Katherine Johnson, as seen in the Oscar-winning Hidden Figures film —there was apparently a mishap in trying to secure image usage permission from Johnson’s family. Even so, the set looks pretty incredible, and it will likely enter the ranks of beloved collector’s items, as well as becoming your STEM-loving kid’s favorite new LEGO set this holiday season.