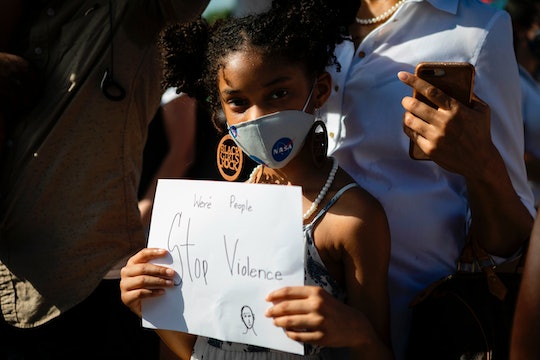 12 Organizations Fighting For Racial Justice You Can Support Right Now

Large-scale demonstrations erupted across the nation over the weekend as millions took to the streets to protest the police killing of George Floyd as well as ongoing issues of police brutality, racial profiling, and structural inequality. Thousands of protesters have been arrested, dozens of cities have implemented curfews, and a number of states have deployed the National Guard in response. While protests are an important means of mobilization, participation in them may not be feasible for everyone. So if you're looking for ways to support organizations helping the Black Lives Matter movement and fighting for racial equality and justice right now, here's where you can start.

Whether you opt to donate to bail funds to help free protesters and activists from jail, choose to support anti-police brutality groups, or donate to Black-centered mental health resources, there are a number of local and national grassroots organizations out there that need your support. But here’s the key — these organizations need support long term. They need donations of time and money after protests and the media attention has died down. They need support when the names of Black people who have been killed by white violence are no longer headline news. They need support next week, next month, next year.

Here are a few organizations you can support to help anti-police brutality protesters, the Black Lives Matter movement, and the fight to end systemic racism in America: