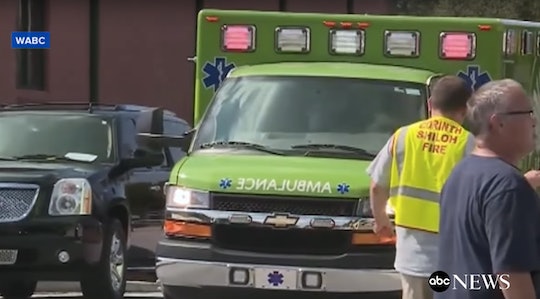 Two 6-year-old children and a teacher were wounded at Townville Elementary School in South Carolina on Wednesday when a teenage shooter reportedly opened fire on a playground. The suspect was almost immediately apprehended by a heroic volunteer firefighter who held the suspect down until authorities arrived to take him into custody. Though it's been reported that the teacher and one of the students have been released from the hospital, one boy still remains in critical condition. Luckily, there are ways to donate to the Townville shooting victims as a gesture of support for the affected families, as well as to provide a unified statement against gun violence.

The hashtag #PrayersforJacob trended on Twitter Thursday in support of Jacob Hall, the victim who remains in critical condition. According to Facebook posts by South Carolina State Representative Alan Clemmons, a bullet hit Hall's femoral artery. Hall has been resuscitated twice thus far — first in the medical helicopter en route to the hospital and another time at Greenville Memorial Hospital. Whereas Hall's parents released a statement asking "for privacy during this difficult time," members of the community have taken it upon themselves to gather support for the family.

Travis Page, a family friend, has set up a GoFundMe page because Hall's parents "will need to be with him as much as possible which means they will have to miss work," Page writes. Jacob Hall's Go Fund Me was trending on Thursday, and has acquired over $35,000 — an amount that has been steadily climbing toward its $50,000 goal. In addition to the donations, friends and strangers alike have left messages of goodwill on the page as well.

Other members of the Anderson School District 4 are rallying around Townville. La France Elementary is sponsoring a fundraiser where students can wear hats in school, with the entirety of the proceeds going to Hall. 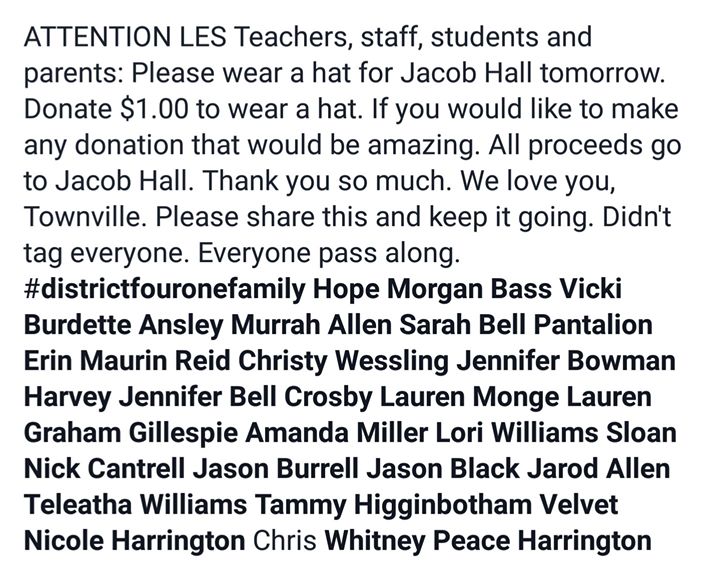 Prior to shooting Hall, the suspect had allegedly gunned down his father — 47-year-old Jeffrey Osborne — at the family's home. The suspect had called his grandparents in tears approximately one minute before the shooting at Townville Elementary.

Townville residents came together for a prayer service on the same night of the shooting. Nearly 100 attendees gathered at Oakdale Baptist Church, the site where students were relocated to after the shooting occurred. School and local officials offered statements of incredulity, strength, and even optimism, all unwilling to let this tragedy break their spirits. Whereas Anderson County Sheriff John Skipper conceded that "the toughest days are yet to come," Anderson School District 4 Superintendent Joanne Avery told Townville staff that their swift response to the shooting was critical. "You saved lives," she stressed.

Donations to Hall's family online are, for now, the most tangible way to show your support. Townville has cancelled school for the remainder of the week while authorities continue to deal with the aftermath of this tragedy.